This week on ‘Arrow’, the show dips into ‘The Flash’ territory as the Green Arrow faces the Bug-Eyed Bandit, a mechanical bee-obsessed villain who Felicity helped the Flash defeat last year. Aside from some background machinations of Malcolm Merlyn and Damien Darhk, the show’s plot comes to a screeching halt to make way for this bizarre, surprisingly uneventful one-off story.

The episode opens with Brie Larvan, the aforementioned bee lady from ‘The Flash’, in prison, breaking into her own record to change her release date. It seems to work, somehow, because she appears later in the episode with an elaborate outfit and quite a level head on her shoulders. And by “level head” I mean the exact opposite, because Brie Larvan has bulging eyes and an undeniably crazy-looking face.

Meanwhile, Team Arrow talks over some recent developments on the non-Green Arrow side of things: Alex, Oliver’s former mayoral campaign manager, is potentially working for Damien Darhk’s wife, the only remaining mayoral candidate, just as Palmer Technologies opens a position for a new head of public relations. This transitions into a longer-than-expected moment of banter between the team about Harry Potter, which is a welcome callback to some of the lighter humor elements of Season 1.

Felicity and Curtis discuss a way to make Curtis’ terrific new invention available to the public. Donna Lance walks in to help Felicity with the break-up (for the umpteenth time). Thea comes to ask Felicity about hiring Alex, and, well, you can probably guess which direction that conversation goes.

On the plot-moving side of things, Malcolm visits Damien Darhk in prison, and Darhk is curious as to why his resources haven’t been deployed. Malcolm explains that HIVE is actually glad the magic-powered killer is locked up. They’re moving forward with Genesis without him. Darhk’s magic has also faded, as demonstrated by his “performance issues” when attempting to magic-choke Malcolm. Turns out the two aren’t the allies I’d predicted they’d become, but Malcolm is instead aggressively working against him. 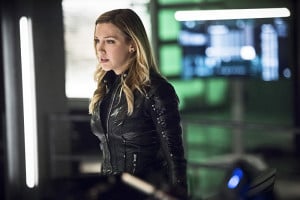 Laurel comforts Ollie with the break-up, which is always weird. Even more weird is the increasing likelihood that the show is heading toward pairing Oliver and Laurel up again. Even more weird than that is this show’s repeated attempt at romantic subplots that just don’t seem to be interested in her.

At a Palmer Industries board meeting, Brie is looking to get a hold of her implantable bio-chip, probably to help her with some bee thing. Oliver, Laurel, and Detective Lance head after Academy Award-winning Brie Larson, I mean, bug-eyed psychopath Brie Larvan, after a swarm of mecha-bees is spotted. 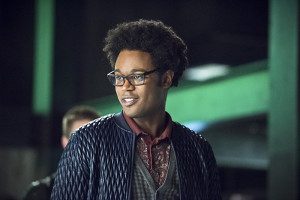 Meanwhile, Curtis is left alone, again, to defend the bio-chip. Instead of getting into another fight, he stumbles his way into the Bunker, and subsequently passes out. Oliver’s pissed. Oh well, looks like he has no choice but to become another vigilante! Mister Terrific, perhaps? He wakes up to Oliver, not so angry this time, and sits down all-too-comfortable at one of the computer terminals. More than likely, he’s just the guy to take over Felicity’s role, which is perfect for the character.

They enlist Curtis’ services and decide to have him hack the bees. Felicity, Donna, and Thea escape Palmer Technologies through a vent, only to find that the bees aren’t too far off. They hide in another closet, and are shortly confronted by the Curtis-hacked bee, who guides them safely out of the building. 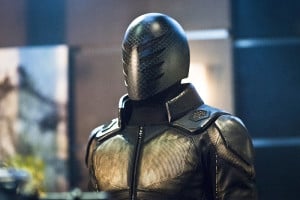 Green Arrow, Black Canary, and Spartan head over to Palmer Tech to save the girls, but they’ve already combined to form a bee man reminiscent of Yellow Jacket from “Ant-Man”. Oliver gets implanted with a bee, and it begins replicating itself inside of Oliver.

Brie Larvan texts Felicity an HD-video of herself threatening the members of Team Arrow, and Felicity, Thea, and Donna make a run for it, using Curtis’ T-spheres to blow their way into the conference room. They usher the board members into the elevator, and Felicity and Thea stay to fight Brie. 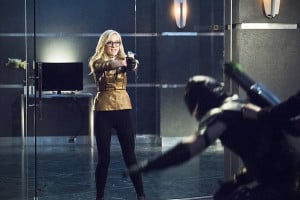 She turns out to have a pretty crazy reason for loving bees so much: it’s because the whole world is a giant honeycomb. I wish she’d just stick with that reason, but it turns out there’s something more serious: she has a tumor that is threatening to cripple her from the waist down. This invokes an overpowering sympathy in Felicity, who tells her just where to find the bio-chip blueprints.

Curtis figures out a way to use Laurel’s Canary scream to kill the bees in Oliver’s body, and it works. Oliver isn’t very grateful, and he yells at Curtis for being lighthearted; quite a change of heart from when he told him he’s “terrific”. He explains to Laurel that this is “not a good life”, and he doesn’t want to pull anyone else into it, especially when they’re so happy and cheerful about it. This all actually comes down to Oliver coping with his break-up, and Laurel touches his face warmly and reminds him that he’s a beacon of hope for the people of this city. After watching ‘Batman V. Superman’, a film, if nothing else, about the way the average person perceives the actions of metahumans, it’d be really interesting to explore how exactly the public views the Green Arrow. We never get those “average joe” scenes; instead, we’re always closer following the exploits of only the cast.

Thea tells Felicity pretty much the same line in an attempt to get her back on the team. Felicity reiterates that’s she’s not coming back, all while manically typing on her keyboard. It makes one wonder if she’s actually paying attention to Thea. Brie busts in, telling Felicity she recognizes her computer activity, and she’s deduced that Felicity was indeed the one who put her into prison. Kind of a stretch, but okay. Felicity reveals to Thea that she wants to help people, but not by fighting crime: by making Palmer Tech a beacon of hope. 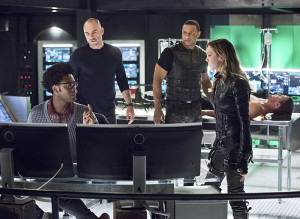 Back at the Bunker, Curtis has forgiven Oliver, giving him a bee-killing arrow, which he uses to full effect. Team Arrow breaks into Palmer Tech, and a big bee battle ensues. Brie Larvan gets taken down by her own bees, and it’s a little sad considering the fact that she’s going to be permanently crippled one day. Oh, well. Life goes on, I guess.

Meanwhile, things are getting worse for Damien Darhk, who gets ambushed in prison by Murmur, another Flash villain, but things quickly turn around. Damien gets Murmur on his side by threatening his grandmother, and tells him to call his organization and get the “other message” delivered. It’s good to know Damien Darhk is still making moves, but he’s certainly losing steam as a villain. I hadn’t gotten the idea that HIVE abandoned him, and I’m not so sure I like that idea. His motives are unclear as it is, so there’s no telling whether he’ll go back to HIVE to oversee the Genesis, or if he’ll pursue his own ambitions, whatever those are.

Oliver congratulates Curtis on his work, and Curtis heads out. He goes home and explains to his boyfriend that the superhero life isn’t really something he’s interested in. He coughs again — well, he’s been coughing the whole episode. That’s gotta mean something.

Malcolm shows up again, discussing the future of HIVE with an off-screen bad guy. And just who is that bad guy? None other than the eternally pouty Andy Diggle.

The flashback sequences this episode were still pretty light. Oliver, Taiana, and Reiter are still coursing their way through the mystical catacombs when Taiana shoots Reiter, and the bullets seem to disappear into air. He tells them while his magic is losing its potency, he should be able to make short work of them. Oliver discovers that Reiter has been killing people to gain power, and he continues to demand the idol. Reiter tosses Taiana, and an outraged Oliver engages in hand-to-hand combat with Oliver. Reiter wins, warning Oliver that he’s become a god, not a monster, by making his eyes glow yellow and lifting Oliver into the air. His power fades, and Oliver knocks him out. Oliver and Taiana suddenly can’t find Reiter, so they decide to take this opportunity to save Taiana’s friends from prison. 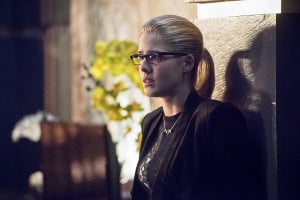 Pictured: Emily Bett Rickards as Felicity Smoak, thinking really, really hard about what she wants to do with her life.

This episode seemed to have not only treaded all-too-familiar terrority, but it simplified certain character relationships, especially Felicity and Oliver’s, for the sake of closure. And there were some other counter-intuitive changes as well, all of which concern me about the series’ momentum. Is a medical philanthropist the best role for Felicity? Of course not. Do we have room for Mister Terrific? Probably not. Is there any purpose for Damien Darhk at this point? Who knows, because we don’t know much about him other than he’s a magical bad guy with a snarky attitude. Things just aren’t lining up the way they should be at this point in the season, but luckily next episode seems to be the adrenaline boost this season needs: all the series regulars will be duking it out, and it even seems like Malcolm Merlyn is back in the fray. No more weird villains of the week. No more Felicity/Oliver drama. Just, hopefully, the ‘Arrow’ we know and love.

“Beacon of Hope” was directed by Michael Schultz and written by Ben Sokolowski and Brian Ford Sullivan. ‘Arrow’ returns next week on Wednesday, April 6th at 8/7c on the CW.