‘Arrow’’s most persistent motifs since Season 1 have been death and rebirth. From Malcolm Merlyn’s and Damien Darhk’s plans to destroy the city in order to rebuild it, to the nearly cyclical resurrections and resurfacings of major characters like Sarah Lance and Thea Queen, these ideas are part of the show’s foundations. Even subtly, Oliver Queen’s rebranding as the Green Arrow invokes symbolism of springtime, freshness, rebirth. I could go on forever, but after all this death and rebirth, the season-long teasing of a major character’s death is something the show really wants us to believe this time. So just whose pretty little CW face is buried six feet under?

It’s someone the Flash knows, but is more important to Oliver. In the Season 4 premiere, we see Oliver standing before a fresh grave. Barry approaches, apologizing for not being there sooner. Oliver is grim as always, and Barry doesn’t seem to be too shaken up. Their only real mutual friend and show character, who has shown up on both ‘Arrow’ and ‘The Flash’ even when Oliver hasn’t, is Felicity Smoak, Oliver’s committed girlfriend and IT support. But as we see in a later extension of the scene, she’s at the burial, too, and wants the killer dead. 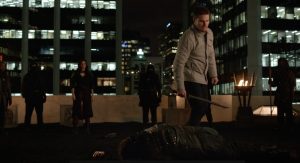 The killer matters. Whoever killed this mystery victim, they’re bad enough that even soft-hearted Felicity wants them dead. The obvious suspects are either Damien Darhk or Malcolm Merlyn, but ‘Arrow’ thrives on surprising its viewers. Could it be yet another villain with an weirdly spelled alliterative name?

Some characters have died, or almost died, too much. Thea is no stranger to the emergency room. Her drug issues early in the series had some serious ramifications, then she became a ninja, then a bloodthirsty Lazarus Pit vampire, and now she’s finally in good health; she has to be safe for now. The entire Lance family story has centered around Sarah’s various deaths and rebirths, and even Detective Lance has had a few scares of his own. It’s someone else’s turn. 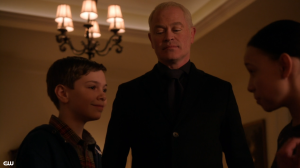 Some deaths wouldn’t bother Oliver that much. Quentin Lance, for example. As much as he and Oliver might respect each other in their unique way, he doesn’t really mean much to Oliver. I’ll even go out on a limb and say Oliver’s son William’s death wouldn’t bother him that much; they have virtually no relationship, and he’s come up so rarely that his death is unlikely to matter to viewers. Besides, in order for Oliver to start “dropping bodies again,” as Detective Lance so eloquently put it, it’d take the death of someone very close to him… 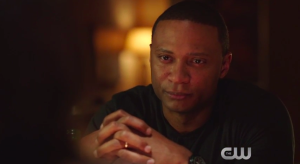 Diggle has had a suspicious amount of closure lately. From his remarriage to Lyla, to his amends with Oliver and his not-really-dead brother Andy, John Diggle’s character has reached plenty of complete arcs this season. That withstanding, he’s never really faced a true threat of death. There haven’t been many hospital beds or Lazarus Pits with Dig; he’s always been in pretty good health, and he has no mystical connections to save him. He’s too military, too physical. He’s unmistakably loyal to his “green brother” Oliver and the rest of Team Arrow, and his loss would be a huge blow to each character on the show.

If ‘Arrow’ really wants to kill a major character but still keep things fresh and shock fans without alienating them, John Diggle needs to bite the dust. It’d be sad to see a solid, core character go, but whether it’s because of weaker arcs or his lacking connection to the source material, there doesn’t seem to be too strong of a fan connection to Dig these past couple seasons. Nothing is confirmed, but I think we should all prepare to get out our knock-off Magneto helmets to wear in memory of the Green Arrow’s first partner. Plus, he’ll be spotlighted in an upcoming episode of ‘The Flash’ this week…

That’s just my take — anything I’m missing? Let us know who you think is in the grave in the comments below.

‘Arrow’ airs tonight, featuring the live-action debut of the The CW animated series hero Vixen, at 8/7c on The CW.