There’s a beautiful spark in the world and only a few have had the ability to grasp and wield it while others have missed it marginally. It’s special, meaningful and can sometimes even be heartbreaking. But beyond all of that bliss, magic and pain lays something extraordinary. Underneath this feeling is something fascinating and I think the entire world feels it anytime they visit a theater to see the latest Marvel Cinematic Universe film. What I and all these people feel and see is actually pretty simple. It’s a miracle, and Marvel Studios intends to finish up that miracle with this summer’s Avengers: Endgame.

If you would have told me eleven years ago that a movie with a talking raccoon and a bunch of superheroes would take over the box office, I probably would have laughed you out of the room. But back then, I was just a kid from Brooklyn and had no idea that Kevin Feige, Jon Favreau and Robert Downey Jr. would change the world with the first Iron Man. That movie was lightning in a bottle and what it did for superhero films will forever go down in history. No, no, no. I’m not talking about creating a shared universe. That was done before. I’m talking about how it succeeds at creating this shared universe and that is beyond belief.

The Marvel Cinematic Universe delivers the best big screen storytelling of all-time and it doesn’t just do it with one film. It does so with a successful culmination of twenty-two films. After 11 years of waiting, I got to see Avengers: Endgame in full and I have to say it strategically wields Stormbreaker and delivers the same lightning in a bottle feeling that the original Iron Man and Avengers films once captured.

The story is simple: they’ve lost. Thanos defeated the Avengers in Infinity War. He got all the Infinity Stones and snapped half of reality out of existence. We’ve never actually had a superhero film where the villain truly wins and we explore what that means with this movie, as it’s the story of what the heroes would do in the aftermath of their defeat. Avengers: Endgame picks up where Infinity War left off and leads us on an action-packed journey about love, friendship, sacrifice and self discovery. 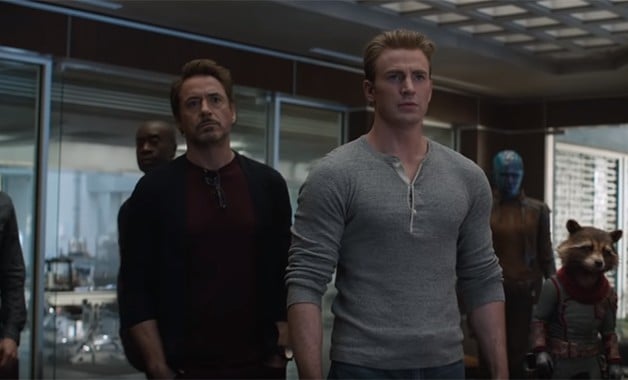 Robert Downey Jr. once again returns as Tony Stark/Iron Man, and going into this movie you have no idea what to expect from his character. Downey Jr. is just as snarky as he was in the original Iron Man and delivers all his scenes with the grace of a leading man. There are plenty of moments throughout the film where you genuinely feel like he is Iron Man. Chris Evans didn’t have much screentime in Avengers: Infinity War, but the Russo Brothers made him a very prominent part of Endgame. Captain America is broken. He’s lost friends and has yet to move on. Evans is in tip-top shape and he definitely makes you want to follow his lead anywhere. This should make the fans that weren’t satisfied with his role in Infinity War very happy as he is definitely the MVP of Endgame.

Speaking of MVPs, some might say that Thor was the MVP of Avengers: Infinity War and I’d definitely agree with them. Chris Hemsworth’s God of Thunder has become the most charming member of the Avengers and his character development from Thor to Avengers: Endgame is something that any writer would give their life to be able to flesh out. His interactions in this film are pretty comedic and the whole thing comes with a twist that’s a real gutbuster. Last time we saw Mark Ruffalo as Bruce Banner/The Hulk, he had some performance issues. The Jade Giant took on Thanos man to man and got his ass handed to him, leading him to where he’s at in this film. While I can’t say much without giving anything way, I expect that comic book fans will love his arc in Endgame.

The last two of the original six are pretty solid. Scarlett Johansson returns as the mysterious Black Widow and she’s pissed the hell off. Thanos did a number on the team and Black Widow really feels it. Johansson portrays the character so well as we’ve seen her do time and time again, but in this movie you really feel that Black Widow knows the stakes and she handles things exactly how a leader would. Jeremy Renner was absent from Infinity War, but he’s back in Endgame and I’ll say this: things don’t go the way you expect, but Hawkeye and Ronin fans are in for a treat. Renner returns with a sadness and uses the last bit of hope he has to try to fix everything that happened. Hawkeye has to be my favorite part of Endgame and it’s for multiple reasons that I can’t fully explain without spoiling the film’s plot.

The supporting cast is so wide in Endgame (and there are plenty of surprises the trailers haven’t spoiled), but the main crew helps pack a serious punch placing the Avengers a few moves ahead of Thanos. Brie Larson is coming off of the mega blockbuster that is Captain Marvel and if you loved her in the solo flick, her role in this movie will drive you nuts. Even if you didn’t like her in Captain Marvel, she’s very good as Carol Danvers in a team environment. Then there’s Paul Rudd’s Ant-Man, who escapes the Quantum realm and becomes the key to reversing the Decimation. Rudd is hilarious and anytime he interacts with the other Avengers it’s golden.

Elsewhere our cosmic Marvel Cinematic Universe characters are doing their part in helping the Avengers reverse the snap. Rocket (Bradley Cooper) and Nebula (Karen Gillan) both return after the snap and they’re helping the team undo the damage caused by Thanos. Cooper must’ve leveled up his voice acting because this was the first time it ever felt like Rocket Raccoon was real. Gillan is a key player in Endgame and it’s pretty nuts how her character’s story unfolds. Her scenes with Thanos and other characters showcase emotions we’ve never seen before from Nebula and her character development is just fantastic.

And last but not least, there’s the Mad Titan himself. Josh Brolin made his debut as Thanos at the end of Avengers: Age of Ultron and he had the brave idea to do everything himself. When he arrived in Infinity War, you immediately knew he wasn’t one to be trifled with. But in this one what was once menacing is now weak compared to the plot and need for the Avengers to take him down in Endgame. The movie isn’t without flaws, but as far Marvel features go, Avengers: Endgame truly is a masterpiece that will leave you an emotional wreck.

Overall Thoughts: Avengers: Endgame succeeds in every way. It finishes up a 10-year, 22-film story arc that’s pretty damn astonishing from start to finish. The characters and actors have all become very important staples in our lives and quite frankly I don’t know what I would do without the Avengers. With its fantastic story, amazing visuals and a few other things I can’t really mention in this review, Avengers: Endgame solidifies the Marvel Cinematic Universe as a masterpiece. Kevin Feige, Joe and Anthony Russo and the cast should all commend themselves for the product that they’ve delivered.