A cut scene from the Avengers:Endgame script reveals that Doctor Strange villain Dormammu was expected to be in the film.

Dormammu made his Marvel Cinematic Universe debut in 2016’s Doctor Strange. In Doctor Strange, Dormammu was teased to be the film’s primary villain, but that notion was unexpectedly turned on its head when Doctor Strange put the legendary Dormammu in a time-loop. Leading to one of the MCU’s funniest moments, Dormammu eventually retreated, leading Doctor Strange to successfully restore balance to Earth.

Now, it appears that the Doctor Strange villain was expected to return in Avengers: Endgame in one of the film’s time travel scenes. According to a cut scene from the script, the Ancient One from 2012 was supposed to show Hulk a portion of her reality where Dormammu returned due to the Avengers’ actions. Unfortunately, this scene appears to not have been shot for Avengers: Endgame. However, we do have the script excerpt from Avengers: Endgame showcasing the cut scene featuring Doctor Strange villain Dormammu, courtesy of Comicbookmovie.com. 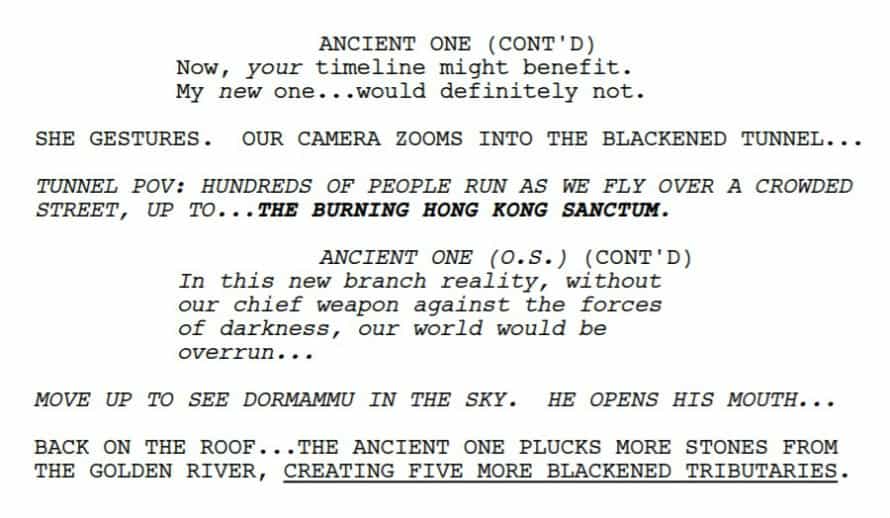 As seen in the script, Dormammu would appear and and attack the Hong Kong Sanctum, tying his scrapped cameo in Avengers: Endgame with his appearance in Doctor Strange. While his scene would have been brief, it makes sense why Dormammu wasn’t showcased in Avengers: Endgame, as there was already a lot going on. This is one of the prime cases of where less is more, allowing the viewer to imagine exactly what could have happened if the stones failed to reappear.

What are your thoughts on Doctor Strange villain Dormammu getting scrapped from Avengers: Endgame? Comment below and let us know!