The last time fans saw The Hulk was at the end of Avengers: Age of Ultron as he was jettisoned into outer space inside of a Quinjet, hidden from view due to Tony Stark’s stealth mode. After rumors of a Planet Hulk movie circulated, it was finally revealed what came of the big green guy: he would be joining his fellow Avenger, Thor, in a space romp across the galaxy in Thor’s third stand-alone film (if you can call it that), Thor: Ragnarok.

Thor: Ragnarok has been described as as a cosmic team up film, putting Hulk and Thor together while the rest of their colleges were battling it out on Earth during Civil War. As the film inches closer, new set images have been surfacing giving fans a first look at movie details such as Asgard, Chris Hemsworth’s new look, and now, a Quinjet (presumably the same Quinjet that carried The Hulk to outer space in the first place). 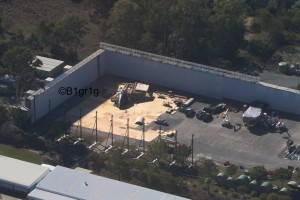 This is still mostly speculation, as the image is from the distance and is not totally clear, but it makes the most sense after you think about the events leading up to the movie. If you look closely, you can make out the rounded front of the jet, along with what looks like the beginning of one of the wings. Chances are, it’s definitely a Quinjet.

Thor: Ragnarok, which will be directed by Taika Waititi, stars Chris Hemsworth as Thor, Tom Hiddleston as Loki, Cate Blanchett as Hela, Tessa Thompson as Valkyrie, and Mark Ruffalo as Bruce Banner/Hulk. Also appearing in the film are Jeff Goldblum as the Grandmaster, Karl Urban as Surge, Idris Elba as Heimdall, and Anthony Hopkins as Odin.

The movie will hit theaters on November 3rd, 2017.