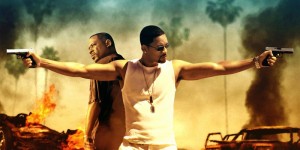 Actor Martin Lawrence recently sat down on Jimmy Kimmel Live and the conversation went into the anticipated sequel to the Bad Boys film series featuring him and Will Smith. The first two films, directed by Michael Bay have grossed more than $400 million, so it is actually surprising it took this long for a sequel to be made. The third anticipated film, Bad Boys For Life, is expected for a January 2018 release date. If successful, there will be an additional untitled Bad Boys sequel to come in July 2019.

When asked by Kimmel about the upcoming sequel and when they would start filming, Lawrence had a few things to say:

“We’re looking towards maybe March. So hopefully it may happen if we can get everybody together at the same time.”

Kimmel asked if there was any holdout causing the delay to start filming, Lawrence also gave an answer.

“I don’t think there’s no holdout. It’s just a matter of getting the script right and everything and just doing it at the right time.”

The film was originally scheduled for a June 2017 release date, but had to be pushed back. Director Joe Carnahan previously stated that the film needed to be pushed back due to Will Smith’s film schedule related to Suicide Squad and other projects as well as a cluttered movie release schedule in 2017. Martin Lawrence’s statements seem to back up that statement as well.

Bad Boys For Life will hit theaters January 12, 2018. Starring Martin Lawrence and Will Smith, and directed by Joe Carnahan.