Batman: The Killing Joke, now has a release date: Digital HD on July 26th, and Blu-Ray and DVD on August 2nd.

The Killing Joke is an R-rated animated adaptation of the comic book by the same name by Alan Moore and Brian Bolland. The film stars Kevin Conroy and Mark Hamill returning as Batman and the Joker respectively. Hamill and Conroy have been playing these roles since Batman: The Animated Series in 19991.

Box art for the film has also been released: 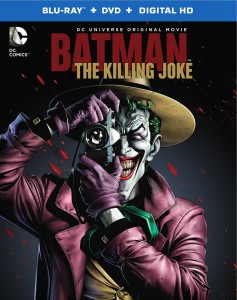 Bruce Timm and Sam Register will executive produce the film, with Alan Burnett as co-producer. Sam Liu is directing and the script is written by comic book writer Brian Azzarello.

There will also be a Deluxe Edition Blu-Ray combo pack including a limited edition Joker figure running for $29.96. The regular Blu-Ray costs $24.98, while the DVD is $19.98.

“Based on the acclaimed graphic novel of the same name,Batman: The Killing Joke takes a journey into the dark psyche of the Clown Prince of Crime – from his humble beginnings as a struggling comedian to his fateful encounter with Batman that changes both of their lives forever. Years later, and now escaped from Arkham Asylum, The Joker devises a plan to prove that one bad day can make anyone as insane as he is – setting his sights on Commissioner Gordon. It’s up to the Dark Knight to put a stop to The Joker’s latest scheme and save one of Gotham City’s finest. Following a gripping prologue introducing Barbara Gordon’s heroic adventures alongside Batman as Batgirl, Batman: The Killing Joke stays true to the authentic tale that has held fans’ imaginations for nearly three decades – spotlighting the birth of a Super-Villain, the fortitude of a Super Hero and the punchline that will leave you speechless.”

The DVD and Blu-Ray will include a sneak peek at the next DC animated movie, while the Blu-Ray includes two featurettes about the music and artistic process of the film as well as two episodes of  Batman: The Animated Series, “Old Wounds” and “Christmas with the Joker.”