We have an exclusive look at Batman: The Definitive History, a new book about the long history of the DC Comics icon.

The new book from Insight Editions is a treasure trove of new information covering Batman’s incredible history in comics, games, television and film. Batman: The Definitive History includes commentaries from key figures who have all played parts in bringing the Caped Crusader and his Rogues’ gallery to life. Filmmakers like Tim Burton, Christopher Nolan, Joel Schumacher and Zack Snyder offer insight into how they brought their versions of the Dark Knight to the big screen, while legendary writers such as Grant Morrison and Scott Snyder discuss Batman on the page.

Written by Andrew Farago and Gina McIntyre, the book also uses never-before-seen art and photography from Batman and Batman Returns that was previously kept in the Warner Bros. archive. Fans will also be keen to discover the 40-page film script written by Batman co-creator Bob Kane called Return of the Batman. Batman: The Definitive History also includes a foreword from Michael Keaton, who played Bruce Wayme on the big screen in Tim Burton’s film, while legendary voice actor Kevin Conroy provides an introduction. Take a look at two exclusive spreads from the book below. 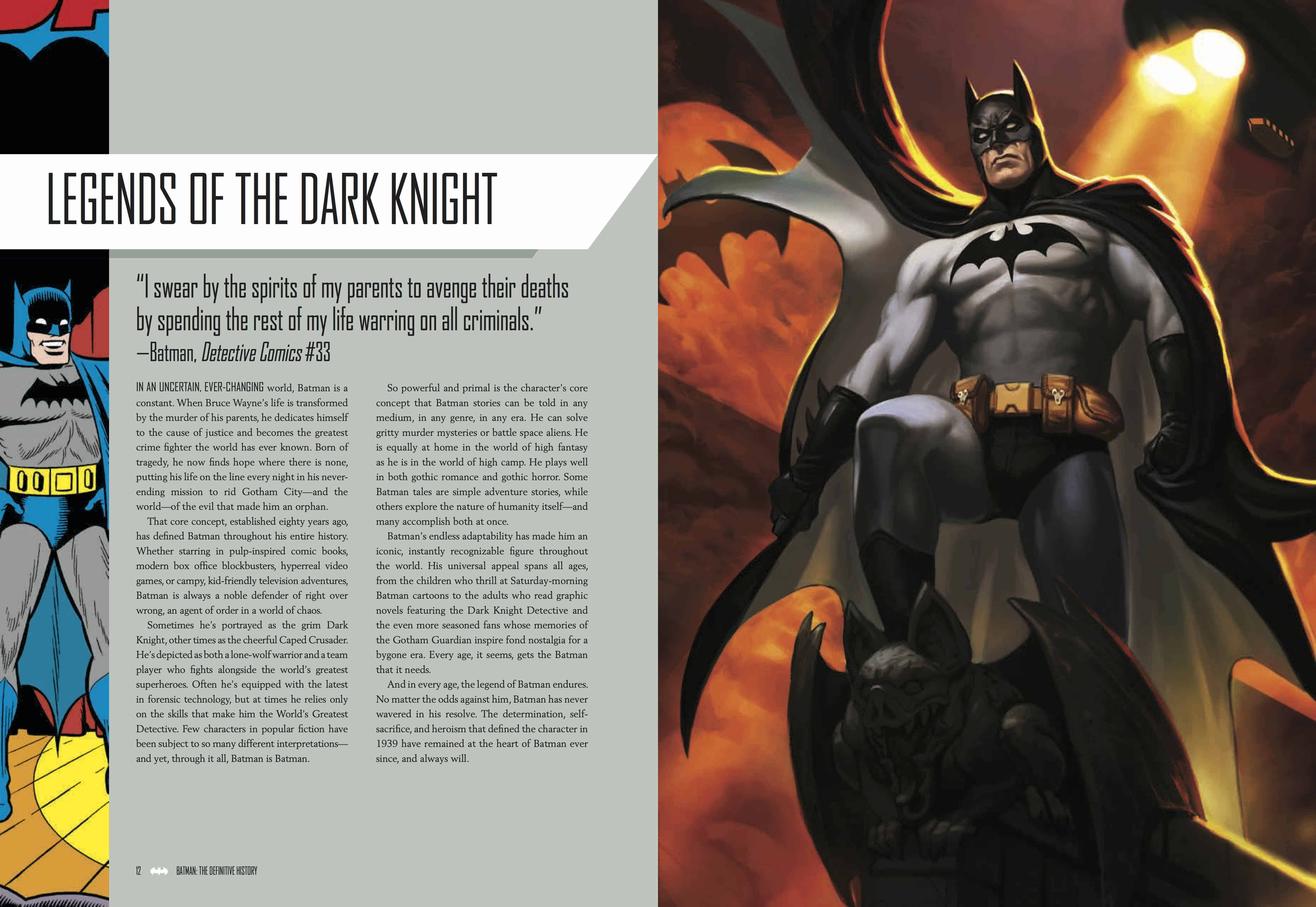 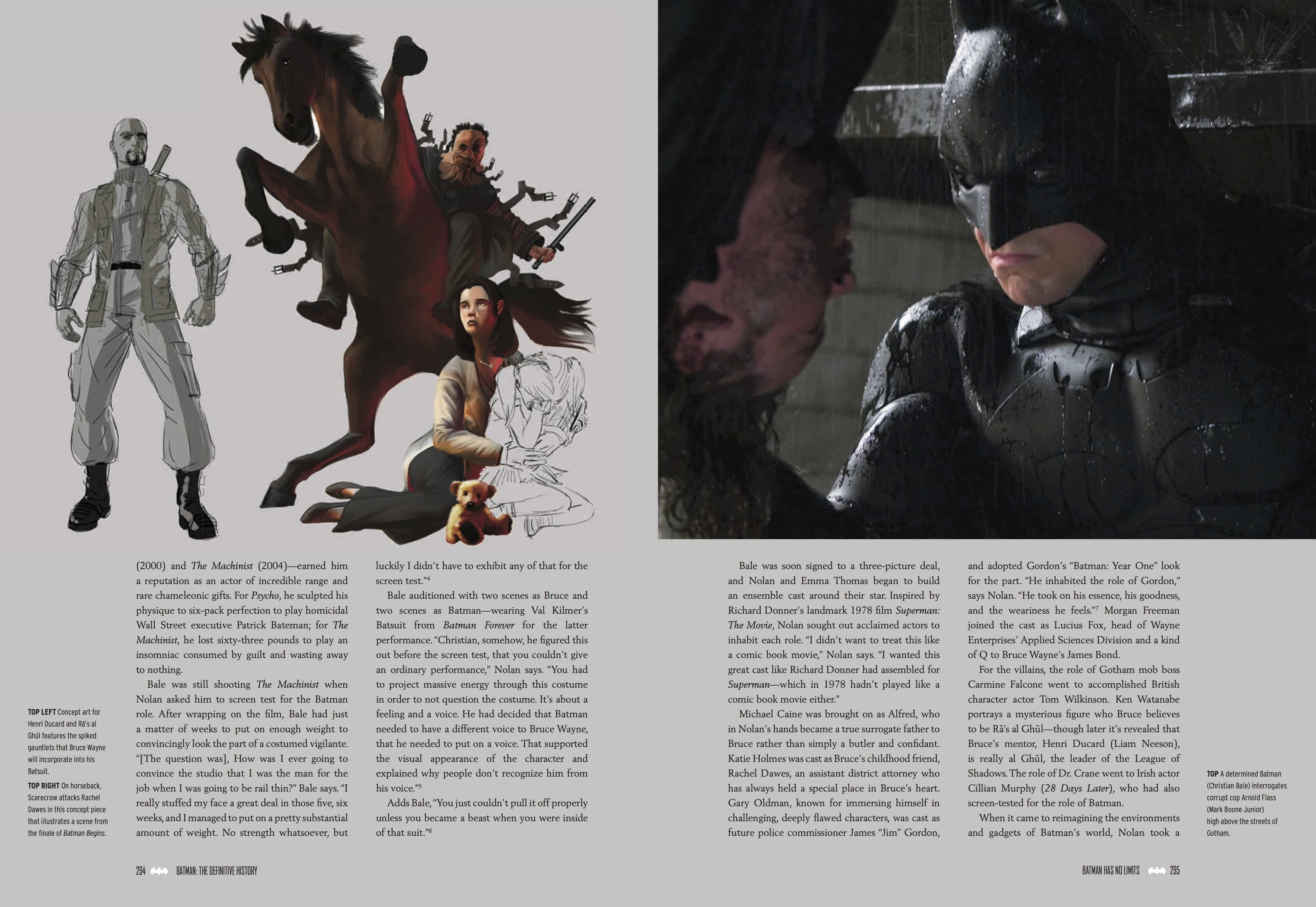 With so much unique material and a variety of hidden gems, will you be picking up Batman: The Definitive History ? Let us know in the comments!

Here’s the synopsis for Batman: The Definitive History:

Since his 1939 debut in the pages of Detective Comics, Batman has become an icon, instantly recognizable the world over. Yet, despite being known to millions, Gotham City’s guardian has been interpreted in so many radically different ways that we all now have our own Batman. To some he’s the colorful Caped Crusader who dispatches villains with a POW! To others he’s the grim Dark Knight hell-bent on avenging the death of his parents. And to others still he’s made of LEGO, has great abs, and likes to eat lobster thermidor!

For the first time, this deluxe volume tells the complete story of Batman and the many forms he’s taken throughout the years across comics, TV, animation, film, video games, and beyond, to present a compelling portrait of one of the most recognizable and versatile characters in the history of fiction. Covering the complete history of Batman in vivid detail, the book features exclusive commentary from the key creatives who have been instrumental in building the Dark Knight’s ongoing legacy, including Neal Adams, Tim Burton, Paul Dini, Steve Englehart, Mark Hamill, Grant Morrison, Julie Newmar, Christopher Nolan, Denny O’Neil, Joel Schumacher, Scott Snyder, and Zack Snyder.

Along with taking readers on an unparalleled journey into the creation of the most memorable Batman moments in the character’s eighty-year history—from the “Knightfall” comics arc to Tim Burton’s films and the Arkham video game series—the book busts open the DC Comics and Warner Bros. archives to deliver an avalanche of never-before-seen visual treasures that are guaranteed to blow the minds of Batman fans everywhere.

Filled with exclusive insert items that further deepen the reading experience, Batman: The Definitive History of the Dark Knight in Comics, Film, and Beyond, is the ultimate exploration of a true legend whose impact on our culture has no limits.

Batman: The Definitive History is available from October 29.