If you are a fan who was satisfied with Batman v. Superman: Dawn of Justice but found yourself dissatisfied with the subsequent home video release of the film, then Amazon’s exclusive limited edition box set may be what you’ve been hoping for. 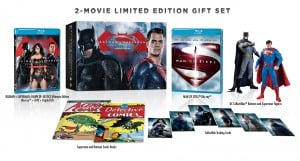 Though set at a hefty price of $123.99 U.S., the gift set is scheduled to be released on December 6, 2016, just in time for the holiday season. Fans can pre-order the box set now by following this link to Amazon.