The Batwoman trailer debuted earlier this week with the first look at Ruby Rose’s Batwoman in her own series, but it’s being massively comment bombed on YouTube.

The comments are reminiscent of those from Captain Marvel and Star Wars: The Last Jedi which seems to imply the pushing of  a “feminist agenda.” At the time of this writing, the video has over 3 million views but over 200k dislikes. The comments are flooding in and the trailer is still trending on YouTube. Here are some of the comments: 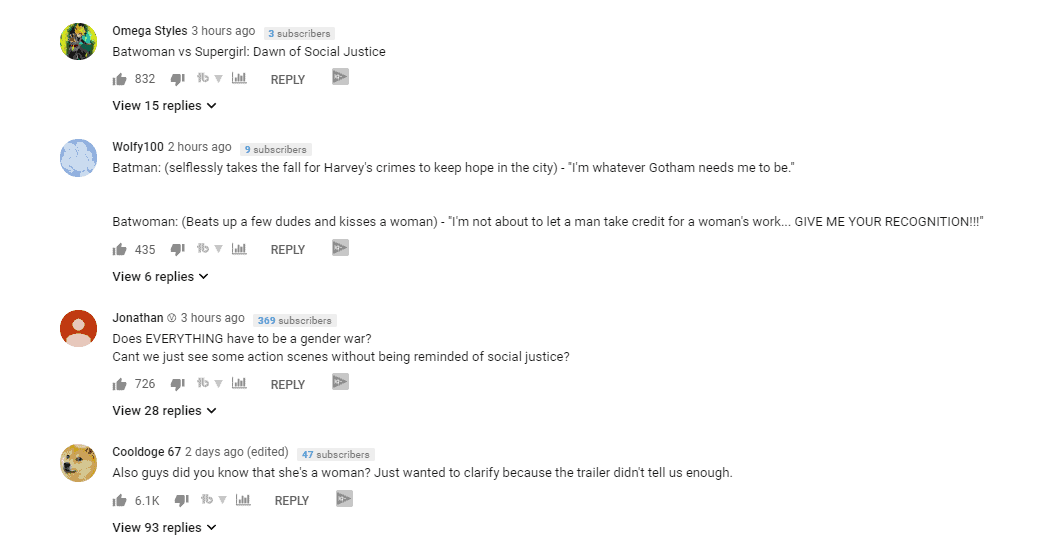 Batwoman Katharine Cane made her debut in the maxi-series 52 in issue 7 and later went on to have her own series in 2011 as Batwoman in Batwoman #1. She was a lesbian expelled from West Point due to the Don’t Ask, Don’t Tell US Military policy that banned LGBTQ people from service. It was officially repealed later in 2011.

You can check out the full trailer for Batwoman below:

Do you think Ruby Rose’s Batwoman will continue to face backlash after the series debuts? What are your thoughts on the first trailer for the series? Let us know down in the comments!

Ruby Rose will be the first openly gay superhero to lead a live-action series. Ruby Rose made her debut in the Arrowverse last year in during the Elseworlds crossover event last year which featured Green Arrow, The Flash, and Supergirl visiting Gotham City after learning about the machinations of an Arkham Asylum doctor.

Here is the official synopsis for Batwoman: