Ben Affleck’s Batman already looks like the best live action interpretation we have ever seen before. His batsuit is comic accurate, his Bruce Wayne voice is on point, and his artillery is a force to be reckoned with. I mean, c’mon a grenade gun and a lot of other Superman deterrents makes this Dark Knight a complete bad ass. Speaking with EW, Affleck gave a few hints about his role in the upcoming Justice League movie:

“Batman represents human beings, mortal men, In a world of Flashes and Aquamen and Supermen, there needs to be that guy. It’s interesting that he became the leader of the Justice League in the books – I’m not sure how that will play out here – but his humanity is also an asset.”

Jeremy Irons, who plays Alfred Pennyworth in the highly anticipated movie, also spoke to the magazine about his incarnation of the character. Here’s what the actor had to say:

“Alfred is a lot more hands on in our film that he has previously been. He’s a bit of a grease monkey, and he’s very involved in the decisions Bruce makes.”

Batman v Superman is only a few months away and we’ve only received a few looks at Ben Affleck’s new lair. In the latest issue of Entertainment Weekly they give us a detailed look at the Batcave. Check out some low quality screen grabs below. 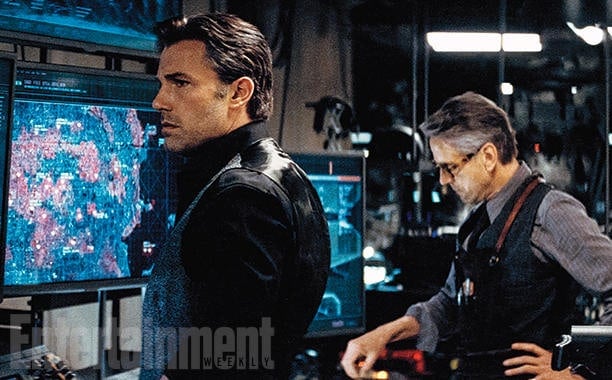 What do you guys think? Let us know in the comment section below.