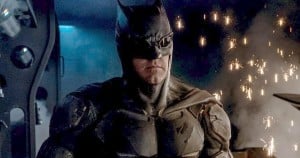 Academy Award winner Ben Affleck debuted as Bruce Wayne/Batman in this year’s Batman V Superman: Dawn of Justice, and reprised his role in a very quick cameo in August’s Suicide Squad. Despite the rocky reception both films received, the one component universally praised however? Batman. Affleck’s portrayal of The Dark Knight has been incredibly successful, and thus, there is no doubt Warner Brothers’ are over the moon over it.

Affleck is currently promoting his newest film, The Accountant, in which he appears alongside his Justice League co-star, J.K. Simmons, who will play Commissioner Gordon. In a new video interview with Mario Lopez from Extra, the actor revealed some details regarding the new Batsuit the Caped Crusader will sport in Zack Snyder’s Justice League.

On the new suit, Affleck stated:

“There’s two suits in Justice League. One we’ve seen before, and then one that he creates because of the nature of the mission… Which I can’t give away. But it was a chance for them to play with the suit and add elements to it, and tech it out. I thought they did a really good job.”

Lopez then asked Affleck if he will direct the upcoming Batman standalone film. For months, people have wanted to know if Affleck will direct or not, but it appears the actor will not proudly say he is until that script is 100% correct. As you may remember, Affleck refused to commit to directing duties earlier in the year as the script was not right.

When asked about directing the film, Affleck said:

“That’s right, yeah, that’s what they say. J.K. Simmons will be in it, just like this one. I wanna do all my movies with J.K.”

So, that being said, I think it is finally safe to assume Affleck will be directing the upcoming Batman film. What do you guys make of all this, the suit and the standalone? Are you excited to see Affleck don the cape and cowl once again?