Recently, Matt Reeves provided some updates on the status of the script for The Batman. Among the details that Reeves provided was that he was still speaking with Bruce Wayne himself, Ben Affleck. Now, there’s been a lot of back and forth from outlets out there in the blogosphere on Reeves wanting another actor or, more recently, that his film would be an adaptation of Year One, thus necessitating the need for an actor to portray a younger Batman. Thus, the aforementioned back and forth on Year One at least was just about silenced.

But suppose that Matt Reeves did want to tell a story from Batman’s long history in Gotham City. There always exists the option to tell a Batman tale with a post-Justice League Batman with Ben Affleck in the main role, sure, but with Batman’s rich mythology, there also exists the option of exploring a time before we first met the DCEU’s Batman in Batman v Superman. You could do this with a different actor just playing a younger version of Ben Affleck’s Bruce Wayne…or you could use the wonders of technology to make Ben Affleck look younger.

Now, we’re not talking as young as, say, Dazed and Confused Ben Affleck, but someone over on Reddit posted an image showcasing a side-by-side comparison of Ben Affleck as Batman. The left photo is from Dawn of Justice, while the right is the same image, but CGI work and de-aging showcases a younger looking Affleck, thus asking the question: Would fans prefer that over a recast? Here, have a look at the image and judge for yourself. 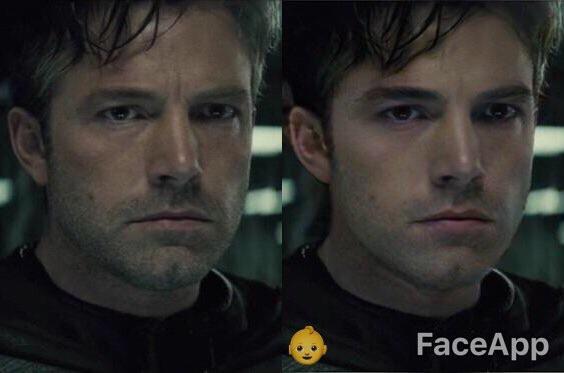 There exists a difference between this and, say, how we got a younger Robert Downey Jr. in Captain America: Civil War. That was just for a single scene. What this is proposing applies to the entirety of The Batman for Ben Affleck which, while not impossible, could be very costly and possibly create that uncanny valley effect. I hope I’m not the only one thing about Rogue One: A Star Wars Story right now.

Sure, the CGI work in Matt Reeves’ films for Dawn and War for the Planet of the Apes has been impressive, but it could be a tricky situation seeing that applied to humans for a whole movie. But what do you think? Would you prefer a solution like this if it meant having Ben Affleck still in the role? Would you just want a different actor outright? What would you ultimately hope to see with The Batman as far as Bruce Wayne goes? Let us know in the comments below.

The Batman is to be directed by Matt Reeves and will not, I repeat, will not be an adaptation of Year One. Stay tuned for more updates on The Batman.