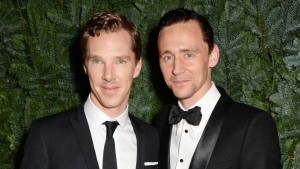 Old friends Tom Hiddleston and Benedict Cumberbatch share their charming friendship in the October issue of Interview Magazine. Cumberbatch stepped into the role of interviewer to discuss Marvel, careers and more with his pal Tom Hiddleston. The interview took place in August while Hiddleston was filming on location for Thor: Ragnarok. Hiddleston is in Australia to reprise his role as Loki in the Marvel Comic Universe upcoming Thor film. Cumberbatch also recently joined the Marvel family, something he is excited to share with Hiddleston. Cumberbatch will star in November’s Doctor Strange.

The two friends have also starred together in 2011’s WWI film, War Horse, but the admiration for each other began long before that.  Cumberbatch also has a starring role in Sherlock and Hiddleston is rumored to be inconsideration for the next Bond.

Cumberbatch took his role of interviewer and journalist seriously but gave it a bit of British flair.  They start the interview by discussing their cultural stereotypes:

BENEDICT CUMBERBATCH: “Like all interviewers, I should first of all thank you, Tom, for taking this time.”

TOM HIDDLESTON: “[laughs] Thank you, Benedict. We should just thank each other for our time. For the rest of our lives.”

CUMBERBATCH: “And then, in typical British fashion, we should just apologize for everything as well.”

They go on to discuss their roles in the Marvel world and how rewarding it is to work on this material and with such a great cast. Hiddleston is particularly excited to be working with Chris Hemsworth (Thor, himself). He states that he had an instant connection with him and remarks how extraordinary it is to “share this mad journey with Marvel” with Chris.

The best thing about it, honestly, is working with Chris again. I first met him in Kenneth Branagh’s house in England in 2009. We were mere children, in the very beginning of our acting journeys. We made an instant connection, and it’s been extraordinary to share the ride with him—this mad journey with Marvel. Anthony Hopkins has been on set this week. And Taika Waititi is magnificent. He has found a way of honoring everything that came before but doing his own thing. And he’s so funny. His films—and if you haven’t, you must seek them out: What We Do in the Shadows, Hunt for the Wilderpeople—they have this combination of light-hearted, good humor and emotion. They’re very moving. Everyone’s really happy. Of course, we’re just at the beginning.

Hiddleston then asks Cumberbatch about how he feels stepping into the public eye as his star rises even further with his addition to the Marvel family. Doctor Strange is one of the most highly anticipated Marvel films to day, something that is not lost on Cumberbatch. He remarks how amazing his San Diego Comic-Con Hall H experience was when he took the stage after the Doctor Strange intro:

I felt it was all about the part rather than everything else. I’ve been to Comic-Con, and it’s a very nice way to give back to the fans that drive these things. It was quite scary. I felt like Pink Floyd. It’s just like, “Hello, hi,” after the fans are all screaming. That side of it is just phenomenal, and it makes me giggle, and I don’t know whether I’ll get used to that. I can’t wait to see how it expands the universe. I’m also part of your crew! It’s an amazing cast of actors. And it’s the most fun hard work you’ll ever do, I think, as an actor. They really know how to treat you right. And the material is challenging, witty, and a lot of fun to do. Doctor Strange is a complex, funny, but exciting character.

Cumberbatch then asks his friend how he stays grounded in the public eye; something that has been difficult for Hiddleston as of late. Ever the gentlemen, Cumberbatch does not mention his recent breakup with a certain songstress.

Check out the full interview at Interview Magazine (link below).