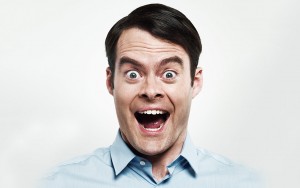 Superbad‘s Bill Hader has officially joined the cast of the upcoming Power Rangers reboot as the team’s trusty robot ally. After leaving Saturday Night Live a few years ago, Hader has made successful film appearances in The Skeleton Twins, The Angry Birds Movie and Judd Apatow’s Trainwreck. However, Hader has never been a ‘blockbuster’ guy, but that has all changed today. In an official post on the Power Rangers Instagram account, it appears that Bill Hader has joined the surprisingly incredible cast for the reboot. For months fans have wanted to know if Alpha 5 would even appear in the film, and now they are enticed to Alpha 5 and a brilliant comedian portraying him. Hader joins Breaking Bad star and Oscar nominee Bryan Cranston and Pitch Perfect star Elizabeth Banks as the three big stars of the film.

I honestly do not know what is going on with this film. The cast, crew and writers all lead me to think this could be one of the best reboots in a really long time. How can you possibly go wrong with such an immensely talented cast? After this announcement, I for one cannot wait for that first trailer. So what do you guys think? Has this made you excited for the upcoming Power Rangers film?