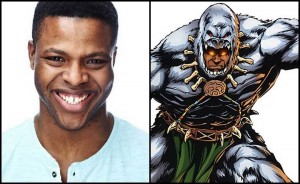 In really exciting news, the newest Marvel Studios production, Black Panther, has cast Person of Interest actor Winston Duke as the key villain M’Baku/Man-Ape. Variety reports that the relatively new comer has appeared in very little, and because of this, it should come as a huge surprise that the actor has landed such a huge role. One would assume the character is not too big of a deal in the second film starring Chadwick Boseman’s Black Panther. In typical studio fashion, Marvel declined to comment on the casting. According to the report, the studio test The Get Down star Yahya Abdul-Mateen II earlier this week before casting Duke. As previously stated, Duke is relatively new to the industry, having just graduated from Yale School of Drama. Not a bad way to start your movie career, huh?

With the addition of Michael B. Jordan as the film’s main antagonist, M’Baku will most likely appear in the film as a side villain, much like Crossbones in Captain America: The Winter Soldier. In the comic books, M’Baku was one of Wakanda’s most powerful enemies and one of Black Panther’s fiercest of foes.

So what do you guys think of this casting? Are you excited to see M’Baku in Ryan Coogler’s Black Panther? Further details about this story should hit the internet fairly soon. Black Panther hits theatres everywhere on February 16, 2018.