It’s another Tuesday morning for me here in the UK, which means the Box Office actuals for last weekend are in and this week saw a number of new releases- three to be exact. We had a couple of new sequels opening in The Conjuring 2 and Now You See Me 2 as well as the anticipated Warcraft which opened in a number of locations worldwide a week earlier.

So the top five of last weekend;

Opening at number one was The Conjuring 2, the sequel to James Wan’s The Conjuring which saw Wan return to the critically acclaimed horror which is loved and respected by most critics (although based on the trailer, I won’t go near it because I’m far too scared; which in a way is a good thing for them, it’s just not my genre). Usually with sequels, depending on the success of the first, we see either a significant drop in box office or a significant rise. This can be attributed to perhaps the first film not finding it’s audience until home release and then they come out in force for the sequel, Batman Begins is a good example of this (though it certainly helped that The Dark Knight just so happens to be one of the greatest films of all time). Alternatively a fairly average film can come out at just the right time to make some serious money at the box office, plus its ‘OK’ enough that it can earn average reviews so the studios waste no time getting the sequel underway- then the sequel makes no money thus revealing the lightening in the bottle of the first film, a recent example of this is Alice in Wonderland and Alice Through the Looking Glass. The Conjuring 2 however made a respectable $40.4 million this weekend which is only $1.4 million short of the first Conjuring’s opening to $41.8 million. So it seems to have found it’s audience once again and impressively opened at number one despite some interesting competition. It’s also fairly common knowledge that horror films can be made on a much small budget than most major releases these days so it’s no surprise that The Conjuring 2 has already made its $40 million budget back and almost doubling it with its $90 million worldwide opening. Things are looking good for the young director and now he can focus solely on Aquaman.

Opening at number two we have a bona fide game changer in Warcraft. You may be asking yourself if I said “game changer” just because it’s a major release based on a video game. Well the answer is no (well maybe a little bit yes, but mostly no) the reason Warcraft is changing the game is because despite opening to number two with $24.17 million domestically which is a little less than what I’m sure the studio were hoping for given it’s $160 million dollar budget, it has been very successful worldwide having already earned an impressive $285 million, $156 million of that worldwide total was from China alone which proves China is now one of the biggest film markets in the world and could even potentially overtake North America by the end of 2017. It’s hard for any studio to ignore that potential. Despite the already impressive worldwide numbers, the negative reviews could mean a large drop off next weekend. It’s been speculated for some time that Warcraft would be mostly for it’s preexisting fan base and that usually means it can find that audience opening weekend and likely won’t have the legs needed to really make a significant profit or successfully stay in the top five in the weeks to come.

On to this weekend’s number three. Now You See Me 2, the other new sequel opening and this one raised a few eyebrows. The first Now You See Me was relatively well received, the reviews were ok and it opened at number two with $29.35 million ahead of Will Smith’s After Earth but failed to beat out the Goliath of Fast and Furious 6 in it’s second week. Going on to make about $118 million domestically and $352 million worldwide is certainly enough of an excuse for Lionsgate to get going on the sequel, and three years later here we are. $22.38 million is what the sequel could muster and it may even be enough to gain a third entry this out-of-nowhere franchise, especially if it can make the sort of money the first film made, but there is still a long way to go and a lot of tough competition this summer. 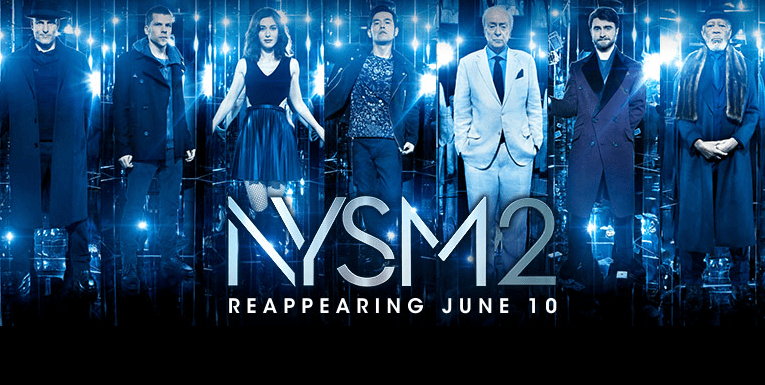 Dropping from number one to number four now is Teenage Mutant Ninja Turtles: Out of the Shadows which had a 59.3% drop off this weekend earning $14.39 million. The heroes-in-a-half-shell seem to be struggling in the foreign market having only earned $55.3 million next to its $60.6 domestic takings which means in it’s second week the turtles could only earn $115.9 million of it’s $135 million budget, but as long as it stays in the top five and doesn’t have too big a drop off next weekend, it should turn a profit, but only time will tell.

Rounding out the top five with a 56.6% drop is X-Men Apocalypse which managed to take in $9.9 million in week two bringing it’s domestic total to $136.3 million which is just shy of 30% of its $476 million worldwide total. This weekends earnings put Apocalypse over The Wolverine making it the 8th highest earning X-Men film… out of 9. Number 1 of course is Deadpool so even though Apocalypse loses that battle, Fox still win the war.

Opening next week we have new additions in Finding Dory, the latest outing from Pixar and Central Intelligence an action comedy starring Dwayne ‘The Rock’ Johnson and Kevin Hart. Both are expecting to open big and it is even speculated that Finding Dory could see a $100+ million opening which would certainly help make up for the disappointing The Good Dinosaur which was the first Pixar film to lose money.

My Box Office predictions for next weekend are Finding Dory at number 1 but I’m going to play it safe and say it will only earn around $92 million. I’ll put Central Intelligence at number 2 with $32 million. The Conjuring 2 I think will stay in the top 5 at number 3 with somewhere around the $19 million mark. I think Warcraft will have a bigger drop than Now You See Me 2 leaving 4th earning around $14 million and Warcraft in 5th to take about $11 million.

What are your box office predictions for next week’s Top 5? Leave your comments below to let me know!