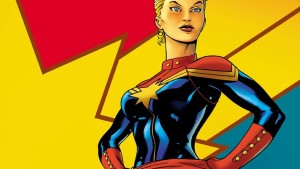 Brie Larson is in attendance at the Toronto Film Festival to promote her new film, Free Fire, and she has taken the time discuss the importance of diversity in female roles and how Captain Marvel is a symbol for women everywhere.

It is safe to say Brie Larson is having an amazing year. She won an Academy Award for Best Actress in a Drama for her portrayal of Mother in Room.  Earlier this summer, Marvel tapped her on the shoulder to play Carol Danvers in Captain Marvel, the first standalone film for a female superhero in the MCU.  The announcement was met with epic fanfare and praise at this year’s San Diego Comic-Con, with Larson being swarmed by her fellow Marvel Cinematic Universe family and embraced by fans. Larson does not take this role lightly and understands the impact it has on superhero movies and women.

When the opportunity came to play (Captain Marvel), this symbol of feminism, to play this empowering role for women and it’s on kind of arguably the biggest platform that we have right now, it’s undeniable that this is an important step and I want to be a part of it.

Larson also sat down with Space Channel to give her commentary on what she finds most exciting about her new role in the MCU and how she thinks this role is important for little girls (and big girls!) everywhere to have a symbol for feminism and power.  With female superhero roles still in the minority, Larson hopes to change this landscape.

The thing that’s been the most exciting now is on social media I get sent a lot of pictures of young girls in the Captain Marvel costume and I’m excited to see more of that. She’s such a great symbol for young girls, and realizing what a deficit we have, that we don’t have more of those. I think it’s really cool to see a girl in a Batman costume or a Spider-Man costume, but I’m really excited that there’s a symbol of women. I think that’s really important.

The short clip is here:

. @brielarson tells @MorganHoffman what she finds most exciting so far about being #CaptainMarvel! #TIFF16 pic.twitter.com/XHqdOPKUhv

Captain Marvel is set to hit theaters on March 8, 2019; there is rumor that Larson may debut in 2018’s Avengers: Infinity War.