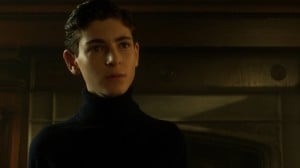 With the season premiere of the third season of Gotham comes next week, we are getting ready for the “Mad City” arc. The show which centers on James Gordon will focus on him as he hunts down the escaped inmates from the Indian Hill facility. We already know that we will get to see The Mad Hatter, a new version of Poison Ivey, and possibly an earlier version of Killer Croc. With a show that centers on Gotham City, what about its most famous citizen who becomes hits the greatest hero, Bruce Wayne.

When first introduced on the show Bruce Wayne was a young child. The show wanted to focus on James Gordon who eventually becomes Commissioner Gordon instead of Bruce Wayne. As the seasons have progressed, so has actor David Mazouz aged. Some have asked if this year would be when we get to see a little bit of Bruce training and eventually becoming the Caped Crusader. Executive producer Ken Woodruff has a few things to say about Bruce.

“Our actor [is] turning 16, so he’s getting close. We’re not quite getting to the point of Batman, but we’re really focusing on trying to get to see different sides of Bruce Wayne and to lay the foundation for all those Batman things. He’s going to be much more active. Near the end of last season, he spent time on the streets with Selina Kyle. We didn’t show a lot of that, but this year we’re going to show what the gains from that experience were — learning how to pick locks, break into things, be silent like a bat. We definitely wanted to show that progression for Bruce.”

So even though he will not be getting any “wonderful toys,” Bruce will be gaining the life skills that will be needed to eventually become Batman. It will be interesting to see specifically this season what Bruce does. In addition to fighting and detective skills, he also has to learn business skills so he can get more involved with Wayne Enterprises.