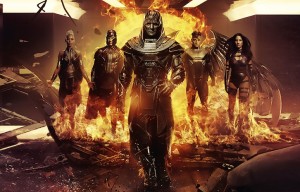 Bryan Singer’s X-Men: Apocalypse has not been trying to hide its Messianic and Biblical themes in its marketing. In interviews, and in the film’s trailers, the antagonist Apocalypse has often been referred to as a God. In a recent interview with IGN, Singer compared the villain to an Anti-Christ figure:

“[Apocalypse is] kind of the opposite of Christ, actually. Christ would have come years after him, by the way. Our premise is he stomped around ancient Egypt, and that’s when he is buried and awakens in 1983. He’s kind of more the God of the Old Testament, the vengeful God who wants the world in a certain order and wants to be worshipped — but he’s also forgiving. He’s also a false god, which makes him kind of like a cult leader. So [Apocalypse actor Oscar Isaac] and [writer/producer Simon Kinberg] not only studied religion but also studied the nature of cults and how they function. And that helped inform us how he chooses his Four Horsemen.”

He went on to talk about Professor X in an opposite light, comparing him to Christ:

“I’ve gotten to explore Professor X when he was an older, bald, wise man, when he’s insecure, when he’s defenseless, when he’s powerful. He’s more of a Christ figure. He chooses to be a teacher. He could go inside Cerebro and rule the world, but he chooses not to. He chooses to teach and preach and hope that people follow his message: peace and unity.”

What do you think of Singer’s comments? Do you like the Biblical elements the director is trying to include? Sound off in the comments below!