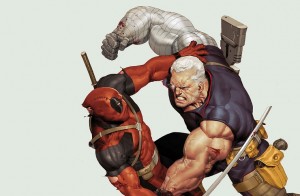 The end credits scene for Deadpool brought the great announcement that Cable would be featured in the film’s sequel. Director Tim Miller and screenwriters Paul Wernick and Rhett Reese were also confirmed to returned to the sequel. In an interview with IGN, the creative team spoke about why Cable is a great foil for Deadpool and the their approach to casting the character. Miller has this to say about the character:

“There’s a lot about Cable’s history that I like because he’s so intertwined with the world of the X-Men. Why he was put together with Deadpool – other than that he was in a comic that wasn’t selling well and Deadpool was in a comic that wasn’t selling well so they put them together – it’s the same reason we had Colossus; he’s a straight man. And I think Deadpool needs a straight man. Cable is the ultimate, archetypal, silent, strong and cynical warrior, which Deadpool is not.”

Rhett Reese went on to describe what they are looking for in potential actors.

“Strength, gravitas, a purposefulness that Deadpool doesn’t have. Deadpool’s kind of got ADD, and we think of Cable as someone who locks onto something and is going to get that thing solved no matter what.”

His partner, Paul Wernick went on to say they want Cable to be “physically imposing”.

What do you think of their comments? Are you looking forward to seeing Cable in the Deadpool sequel? Sound off in the comments below!