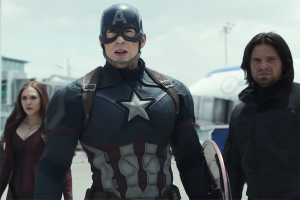 Marvel has released a new viral marketing video for Captain America: Civil War asking the question: Who should pay for the damages superheroes cause? The video shows civilians split down the line discussing who should be paying for the damages when the Avengers need to save the world? The Russo brothers have made it clear that they want audiences to argue over which side they are on in Captain America: Civil War. This video emphasizes the split they are aiming for when it comes to these larger issues about superheroes.

Anthony & Joe Russo are directing with Kevin Feige producing. Louis D’Esposito, Alan Fine, Victoria Alonso, Patricia Whitcher, Nate Moore and Stan Lee are the executive producers. The screenplay is by Christopher Markus & Stephen McFeely. Get ready to pick a side and join the nonstop action playing out on two fronts when Marvel’s “Captain America: Civil War” opens in U.S. theaters on May 6, 2016.

Who do yo think should pay for the damages of the first Avengers films? Sound off in the comments below!