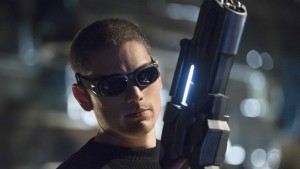 Towards the end of the first season of Legends of Tomorrow, the one hero who sacrificed himself for the greater good was the very popular Leonard Snart AKA “Captain Cold” played by actor Wentworth Miller. First introduced to us as one of the rogues on The Flash, he slowly became somewhat of an antihero and eventually ended up on the superhero team Rip Hunter put together on Legends of Tomorrow. It came somewhat as a shock that the character ultimately met his demise as he was very popular on both The Flash and Legends of Tomorrow. Even more surprising was that actor Wentworth Miller quickly signed a new contract within the “Berlanti-Verse” as a regular, given that his character just died. However, Legends of Tomorrow is, in fact, a time traveling show, and The Flash is about to go through “Flashpoint” which could essentially reboot the entire Berlanti-Verse, so there might be a reality/timeline where he didn’t die. So what are the possible plans for Captain Cold?

It has been confirmed that with the “Legion of Doom” showing up next season on Legends of Tomorrow that there might be some version of Captain Cold on that team of super villains. Showrunner Phil Klemmer was able to add a few details.

“I’m very excited to see Rory meet whatever incarnation of Leonard Snart we might choose. It will be a chance to watch our barely reformed arsonist threaten to backslide.”

This might be an interesting turn of events. For most of season one of Legends of Tomorrow we had Captain Cold convince his partner in crime Heatwave to work on the side of good guys, yet the next time we see him, he might end up being the villain and require Heatwave to try to reach out to his former comrade. Do you think that Captain Cold would be better off remaining a good guy, or is it time for him to become a supervillain once again?