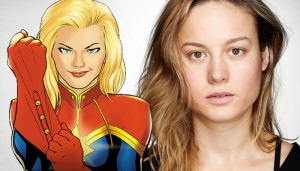 This Friday stars Tom Hiddleston, Brie Larson and Samuel L. Jackson will face off against one of cinemas greatest monsters in Kong: Skull Island. However, going to head-to-head with the King of the Apes is not all the cast shares in common as all three actors play prominent roles in the ever-growing Marvel Cinematic Universe. In a join interview with SiriusXM, Larson, who will star in Captain Marvel as the lead heroine, discussed the extent of Marvel Studios’ secrecy.

Brie Larson jokingly expressed concern when asked if she may appear alongside her Kong: Skull Island co-stars in the MCU.

Brie Larson recounted her experience at Comic Con and how her fellow MCU cast members were unaware that she had been cast as Carol Danvers.

“I think people, and I don’t know, with my very brief experience, my main experience was at ComicCon with the announcement, and I was backstage in the holding area, chatting. I was out of my mind like ‘I’m talking to Tilda Swinton, I’m talking to the new Spider-Man, I’m so amazed’, and all of them were like ‘So what movie are you here for? Are you like lost, or are you supposed to be in a different hall?’ I was like ‘Oh no, I’m like part of this now, surprise!’ and none of them knew. So I think that says something to like just what’s happening behind all of this that it’s magical. I feel like I’ve fallen down this magical hole of mystery that I don’t know what’s happening.”

You can watch the entire interview below!

Though the extent of Marvel Studios’ secrecy may seem daunting to some, longtime MCU cast member Samuel L. Jackson appeared to be used to being kept in the dark. However, Jackson did question why Nick Fury has not met Black Panther.

Captain Marvel is scheduled to be released in theaters on March 8, 2019.