Not just higher, but stronger, further, faster, ’90s, and Brie Larson to boot. Carol Danvers is set to make her Marvel Cinematic Universe debut when Captain Marvel hits theaters next month. The marketing is kicking into high gear with Marvel Studios’ next film arriving in theaters soon. With that comes a poster or TV spot or two or three.

How about just one for today, yeah? A poster designer by the name of Matt Ferguson, who has worked with Marvel Studios, shared a new poster for Captain Marvel that was then also shared by ODEON Cinemas on Twitter. The poster showcases Larson’s Carol Danvers, clad in helmet, flying towards the stars as Marvel’s next heroes soars above the world. Here, have a look for yourself in the poster below. 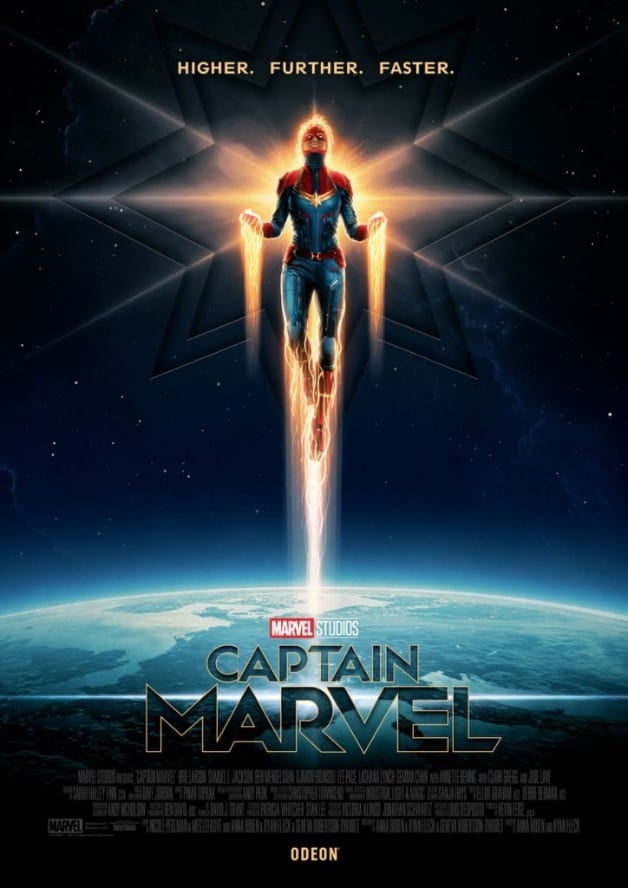 In addition to the new poster, tickets, as you know by now, are on sale for the upcoming Marvel Studios picture. It’s interesting that the marketing for Captain Marvel has been sure to include both a helmet and helmet-less Carol Danvers, though it’ll be interesting to see how she’ll appear for the majority of the film. More than that, whether she’ll also be donning the helmet when she shows up in Avengers: Endgame later in April.

But what do you think of this poster? Do you have a favorite of the bunch when it comes to marketing for Captain Marvel so far? Let us know your thoughts on this and more in the comments below and stay tuned for more news as the release date for Captain Marvel steadily approaches.

Captain Marvel will fly into theaters on March 8, 2019.