I would love to be part of the production of Spider-Man: Homecoming. Not only because it would be an honor to be a participant in a new film bringing the iconic webhead to the Marvel Cinematic Universe, but also because it seems like the cast and crew are having a blast filming this movie. After consistently catching up with actor Tom Holland on social media along with fellow co-stars Jacob Batalon and Tony Revolori just to name a few, the sense of youth-like excitement seems to permeate throughout everyone involved – and that can include some on-set antics as well.

Holland posted a hilarious photo on his Instagram account, featuring a special set chair customized just for him. Okay, obviously it’s not a chair, but a toilet, nicely marked with Peter Parker’s name on it. In pure Spidey-like fashion, Holland made an irresistible pun that even I couldn’t help but smile at:

Just flush away your worries, Tom.

I am willing to bet that this particular toilet is a prop that could be seen in the film at the Peter’s High School bathrooms. But hey, on the bright side, at least Holland will have nice company in between his dialect coach Rick Lipton, and Jacob Batalon, who portrays Peter’s best friend Ned Leeds.

Let’s hope that the on-set antics translate well into the comedy of Spider-Man: Homecoming. Coming-of-age stories become something really special when they implement both the highs and lows of growing up, which would naturally lead into awkward, yet hilarious moments. And yes, sometimes that can include potty humor. 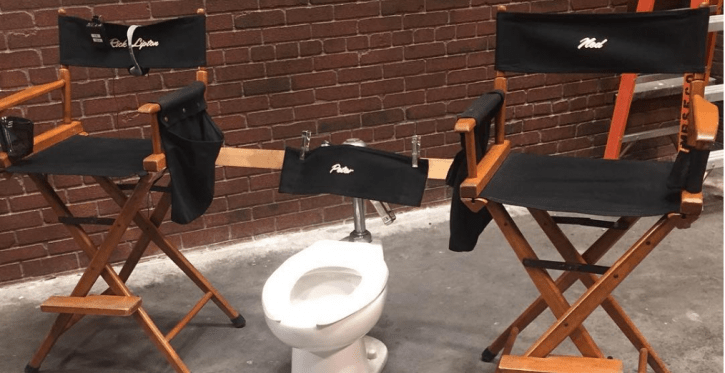