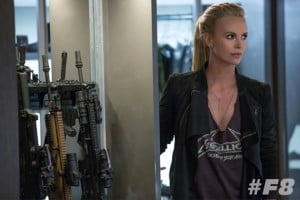 The first look at Charlize Theron in Fast 8 has arrived. Theron will be playing a villain named Cipher in the upcoming film, as revealed by the studio’s social media accounts.

The eighth film in the Fast and Furious franchise is being directed by Straight Outta Compton‘s F. Gary Gray and is currently filming on location in Cuba. Fast 8 will be the first Hollywood film since 1960 to shoot in Cuba. The film will be primarily set in New York City and will reportedly also honor the late Paul Walker by going back to street racing instead of special effect heavy action sequences. Production for the film will be based in Atlanta, GA, like the previous film, but locations such as Russia and Iceland are being considered.

The previous installment, which had the final appearance of the late Paul Walker, earned $1.5 billion worldwide.