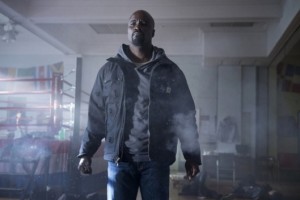 With less than 24 hours before Luke Cage starts streaming on Netflix and pretty much consumes our lives this weekend, the production crew behind the upcoming Marvel TV show recently had the chance to sit down and discuss the upcoming show. Luke Cage himself (Mike Colter), showrunner Cheo Hodari Coker, and Marvel TV head Jeph Loeb talked about the upcoming show.

When talking about the tone and visual look of the show, Jeph Loeb talks about maintaining true to the characters, as well as the city they fight crime in. When discussing all of the Defenders, Loeb comments that the fifth defender is actually New York City. In Luke Cage, that part of the city in Harlen, NY, which is a distinct character as well.

“Luke Cage always has had a very distinct look to it. Specifically in terms of some of the things we talked about, we moved the story up into Harlem.”

When discussing the character of Luke Cage, Coker talks about him being a reluctant hero. Here is a guy who is indestructible, yet the people around him aren’t and that’s where he has to step up and be a hero. Coker drew his inspiration from spending time with rapper Notorious B.I.G. when he was a hip-hop journalist. He describes that Chris Wallace (Biggie’s real name) had to reconcile being both Notorious B.I.G. and Christopher Wallace. The same thing goes for Luke Cage reconciling being just a regular guy as well as a hero.

“That’s the thing with Luke. He didn’t ask for this powers or responsibilities. The people that he cares about end up dead. And so, part of what the arc of the first season really is about is, how does one reconcile being a hero, and how does one accept it and try to find their identity in it, particularly because he doesn’t have a mask and isn’t hiding. If we get a Season 2, it’s going to explore more of how a hero evolves, when most heroes have a mask or are able to hide certain aspects of themselves, but Luke is out there.”

“But when I think about identity and I think about Luke, that’s definitely an influence. Identity and the acceptance of responsibility is what drives him, as a person. What it allows the character to explore is evolution of a man, which is the best thing you can ask for on a series where you’re going to do this, over and over, in different ways.”

Coker has also described Luke Cage as a modern-day Western as well. When discussing the titular character he’s as much Shane as he is Shaft, in which he’s the “man with no name” who ends up a reluctant hero. Colter describes Luk’s Pathos.

“This hero steps into this other gear and becomes what we know he is, even though he’s reluctant to show us that side of himself. That’s what’s always appealing, when you know a person is a bad-ass and you know he can f*ck them all up, but he’s just holding back, and they keep on poking the bear until they get what they want. He doesn’t feel proud that he’s done this, but what are you going to do?”

One thing that will truly stand out in Luke Cage is that this will be a uniquely black show. Most of the principal cast consist of African-Americans, so the topic race will be on full display during the show. One thing that will be a first for the family-friendly Marvel Cinematic Universe will be the use of the dreaded n-word. It’s quite surprising that Marvel even went ahead with the show using such a charged word. For example, there is a line between bad guys Cottonmouth and his cousin Mariah where the word gets tossed around.

“But when the smoke clears, it’s n*ggas like me that let you hold on to what you got,”
“You know I despise that word.”
“I know. It’s easy to underestimate a n*gga. They never see you coming.”

When discussing approaching Marvel about the use of the word, there were some issues by the Disney-owned company as per Coker. He wanted the show to be authentic in the language that was used.

“They had some trepidation, I’m not gonna front. But my whole thing was that, in using this word, I didn’t want it to be comfortable. I wanted [it to be] that, every single time that it’s heard, you think about it.”

“I also really wanted the show to kind of live on its own terms of, This is what it’s like when you eavesdrop on black people talking to each other. That word, at times, will come up in certain ways.”

Jeph Loeb of course as the head guy would have a say in regards to the use of the word.

“When we first got the script in, we had a very honest conversation about how this was a world that was going to be grounded in reality, and that that’s a word that gets used. We were very comfortable in the fact that we have an African American writer and, in many cases, African American actors who were using that word. That’s the only thing we’re very careful about.”

For the complete interview, check out Collider.