After Jurassic World became an enormous box office success, grossing $1.6 billion worldwide, it was no surprise when Universal Studios announced a sequel was set to be released in the summer of 2018. However, when director Colin Trevorrow was announced as the director for Star Wars Episode IX, it became clear that the task of helming the next Jurassic Park film would have to be handed to someone new. In April 2016 Trevorrow announced on Twitter that director J.A. Bayona had officially been selected to succeed him as the director of the Jurassic World sequel.

Despite his busy schedule, Trevorrow will remain on board as a producer and to pen the script for the sequel alongside his co-writer Derek Connolly. Speaking to Jurassic Park fan podcast Ingeneral, Trevorrow hinted that director J.A. Bayona’s background in horror films will influence the tone of the Jurassic World sequel:

“It will be more suspenseful and scary. It’s just the way it’s designed; it’s the way the story plays out. I knew I wanted Bayona to direct it long before anyone ever heard that was a possibility, so the whole thing was just built around his skillset.”

Trevorrow also explained that while he will be serving as a producer on the film, he hopes to have a collaborative relationship with J.A Bayona that is not unlike the director-producer relationship Steven Spielberg and George Lucas shared on the Indiana Jones franchise:

“Film has become so cutthroat and competitive; it felt like an opportunity to create a situation where two directors could really collaborate. It’s rare these days, but it’s something that the directors that we admire used to do all the time—one writes and produces and the other directs, and the end result is something that’s unique to both of them. I’m in the office right now, I’ve been here every day since July working closely with J.A., listening to his instincts, and honing the script with Derek to make sure it’s something that all of us believe in.” 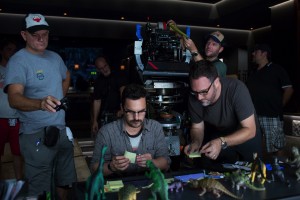 The Jurassic Park films have become known for their combined use of computer generated special effects and animatronic practical effects. So when Jurassic World featured just one sequence where an animatronic dinosaur was used, some fans were quick to criticize the film for relying too heavily on CGI. Trevorrow addressed this criticism, explaining that it was too difficult to bring the Indominus Rex to life with the limitations of animatronic effects:

“I think the lack of animatronics in Jurassic World had more to do with the physicality of the Indominus, the way the animal moved. It was very fast and fluid, it ran a lot, and needed to move its arms and legs and neck and tail all at once. It wasn’t a lumbering creature. We’ve written some opportunities for animatronics into [Jurassic World 2]—because it has to start at the script level—and I can definitely tell you that Bayona has the same priorities, he is all about going practical whenever possible.”

Trevorrow assured fans that despite the lack of animatronic dinosaurs in Jurassic World, the sequel will feature plenty of sequences that require the use practical effects:

“There will be animatronics for sure. We’ll follow the same general rule as all of the films in the franchise which is the animatronic dinosaurs are best used when standing still or moving at the hips or the neck. They can’t run or perform complex physical actions, and anything beyond that you go to animation. The same rules applied in Jurassic Park.” 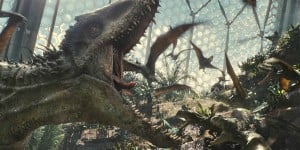 While Trevorrow was tight lipped about the plot for the sequel, he did reveal that the theme of militarized dinosaurs played out very differently before he and Connolly took over the script for Jurassic World:

“I’m not that interested in militarized dinosaurs, at least not in practice. I liked it in theory as the pipe dream of a lunatic. When that idea was first presented to me as part of an earlier script it was something that the character that ended up being Owen was for, that he supported, something that he was actively doing even at the beginning. Derek and I, one of our first reactions was ‘No if anyone’s gonna militarize raptors that’s what the bad guy does, he’s insane.’”