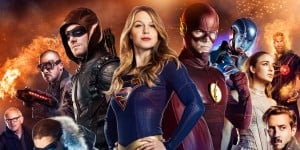 With the success of the Supergirl/Flash crossover this past year on Supergirl and Supergirl moving from CBS to the CW this fall, there has been excitement and anticipation for Supergirl to join the “Berlanti-verse.” This would give her a chance to interact with other DC superheroes on the small screen now that they are all under one roof. It was recently announced that this fall there will be a four-night CW DC Crossover that would involve characters from Supergirl, The Flash, Arrow, and Legends of Tomorrow interacting with each other. What would be the glue that meshed all them together during the upcoming crossover event?

It looks like the newcomer Supergirl will be the one that connects all the shows together for the crossover event. They have not officially stated how Kara will join the current Earth from her own, it is now known that she will come over to The Flash, then Arrow, then Legends of Tomorrow. Not only will she be involved in the show, but there will be a new threat that they all must deal with. Executive producer Marc Guggenheim spoke during Comic-Con.

“It’s an external threat from outside the shows that will involve Supergirl coming over to The Flash, then Arrow then Legends of Tomorrow.”

In addition, he also mentioned how the Justice Society of America will also play a role in relation to the Legends.

“It’s all going to kick off with an epic battle between the Justice Society and the Legends. It’s required that every time there’s more than one superhero in any place at any given time, they have to fight. We’re honoring that rule and that tradition straight out of the gate.”

How excited are you for Kara to be the main focus of the crossover? Sound off in the comments.