Batman v Superman: Dawn of Justice is currently king of the box office. It is a divisive controversial movie and some people think it didn’t deliver in every area. But, it did work when it tried to world build. The film introduces us to our cinematic version of The Flash, Aquaman and Cyborg.

They give us a little glimpse of Barry using his powers to do some good in a convenient store, Aquaman doing Aquaman things under water and Silas Stone trying to save his son by using a Mother Box to transform him into Cyborg. It was a very good intro to the Justice League and what’s to come of the DCEU. It didn’t feel forced and makes you feel intrigued about the future.

The future seems rather good because there’s a chance that WB could include Cyborg in The Solo Flash film. While speaking to Mark Hughes at Forbes, Deborah Snyder hinted at Barry and Victor’s relationship by the time The Flash hits theaters. In the interview she states:

“As you can imagine, when we get to the Flash movie, Ezra Miller and Ray Fisher — who plays Cyborg — are kind of our youngest characters, and they have a really nice comradery with each other. Ezra is super funny, so the tone of that film will be very different than the rest of them.”

Ezra Miller and Ray Fisher are the youngest cast members of the cast of Justice League Part 1 and it would be a good idea for them to be the ones to bring levity and light heartedness to the DC Extended Universe. For them to be friends is in line with the source material, so I don’t see the problem. Since Hal Jordan may or may not be in the film, it’ll be good for Barry to have a friend in the league that matches his level of humor. 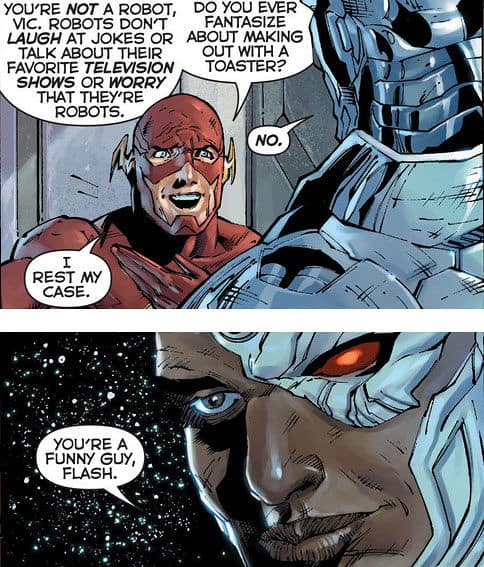 What do you guys think of Snyders comments? Do you think Vic Stone/Cyborg could make a cameo in The Flash? Sound off in the comments section.