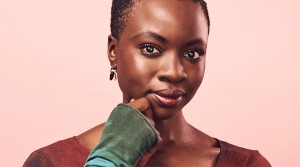 The Walking Dead star Danai Gurira has had a powerful career so far. Despite being born in The United States, when Gurira was younger, she moved to Zimbabwe with her family after the country achieved independence. Since returning to America, Gurira has made a career out of telling African stories others would not. Her Tony-nominated play Eclipsed told the story of Liberian women struggling to survive the Second Liberian Civil War. The actress has enjoyed further mainstream success due to her role in AMC’s The Walking Dead, as well as her upcoming roles in Marvel’s Black Panther. The actress sat down with Entertainment Tonight to discuss Black Panther.

The movie is an incredibly important one for Gurira. In the film, Gurira portrays Okoye, the head of bodyguards to Black Panther. The actress revealed:

“I grew up seeing a lot of superheroes and they didn’t look like me and they certainly weren’t in Africa. I think that it is something great for girls who are like me growing up. Growing up in Africa, we were looking for images we couldn’t always find.”

The film’s timely topic and diverse cast also lends itself to being one of Marvel’s greatest blockbusters, as stated by Gurira. The film will also star Chadwick Boseman, Lupita Nyong’o, and Michael B. Jordan, who will portray the main antagonist, Erik Killmonger.

What do you think about Gurira’s words? It is certainly hard to deny the important job Ryan Coogler has when his Black Panther film hits theatres in 2018.