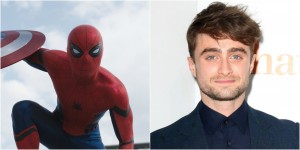 Star of the Harry Potter franchise, Daniel Radcliffe has admitted that he wanted to portray Peter Parker/Spider-Man in the Marvel Cinematic Universe. The 27-year-old Swiss Army Man star revealed in a new interview with Metro that he would have loved to play the character, but he was acutely aware of his age. After starring in Warner Brothers’ Harry Potter franchise, it would come as no surprise that the actor would become extremely picky when it comes to franchise roles. Radcliffe is an avid fan of Spider-Man, having dressed up as him for San Diego Comic Con not too long ago.

“I would’ve been a good Spider-Man but the boat has sailed on that and I’m very happy to watch Tom Holland do it. He’s fantastic.”

When asked if Radcliffe would be interested in joining another movie franchise following his endeavour into sequel territory with this year’s Now You See Me 2, Radcliffe stated:

“If it was good enough and something I was interested in. I’m not sure if I’d sign up for something that was another seven or eight films or ten years but a shorter franchise, yeah.”

Come on, Marvel! Surely you have something for Mr Potter? As great as it would have been to see Radcliffe take on the mantle of the wall-crawler, it is obvious as to why he did not jump into another franchise. That said, would you like to see the actor appear in a potential sequel to next summer’s Spider-Man: Homecoming? Perhaps Radcliffe could portray one of Spidey’s famous foes?

What do you guys think? Would you like to see Radcliffe appear in a Marvel movie, or do you think he is a better fit for a DC Comics movie?