In a way, you can say that the Marvel Netflix series are all about teases. Matt Murdock doesn’t get an actual red Daredevil outfit until the Season 1 finale. Trish briefly shows off a costume to Jessica in the first season of Jessica Jones that looks similar to what Jewel wears in the comics, but Jessica is perfectly fine in a jacket and ripped jeans. And neither Luke nor Danny really need costumes. Same for the Punisher, even though we’ve seen homages to their classic comic designs. But this is about Wilson Fisk. Or rather, the Kingpin.

The name Fisk itself already causes great dread and fear throughout Hell’s Kitchen and beyond, but for the most part, Vincent D’Onofrio’s character has been referred to as just that — Wilson Fisk. It’s not incorrect, mind you. That is his name, but he also goes by, as you know, the Kingpin. Now if you recall, there’s been at least one nod to this name in Daredevil. Back in the first season, during his investigation, Ben Urich had a pin placed through two playing cards: one for the Devil of Hell’s Kitchen and one for Wilson Fisk. And Fisk’s card was the King of Diamonds.

To refresh your memory, here’s an image from the scene I’m speaking of from the first season of Daredevil. 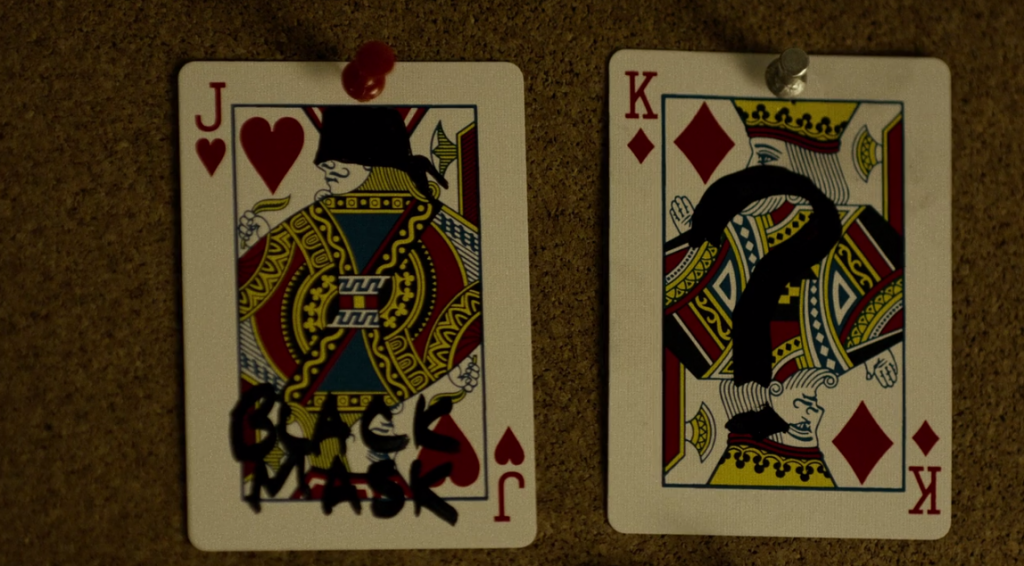 But with the third season of Marvel’s Daredevil hitting Netflix last weekend, and with Fisk finally donning the iconic white suit from comics lore, with that must come a name change. Or rather, a codename. During the third season, Fisk brings Agent Nadeem to meet other agents working on Fisk’s payroll, among them Agent Poindexter — Bullseye. But with any secret organization comes rules, and one of the rules here, as Bullseye explains, is that Fisk must never be referred to by name. You call him by his codename: Kingpin.

And again, there are rules to follow and certain names to abide by, in the same way on Luke Cage where Mariah detested when Cottonmouth referred to her as “Black Mariah.” But here, it’s a nice way to integrate the “Kingpin” name and further pay homage to Fisk’s comic roots. What do you think of how Daredevil implemented the “Kingpin” name for Fisk? Let us know your thoughts in the comments below.

The third season of Marvel’s Daredevil is available now on Netflix.