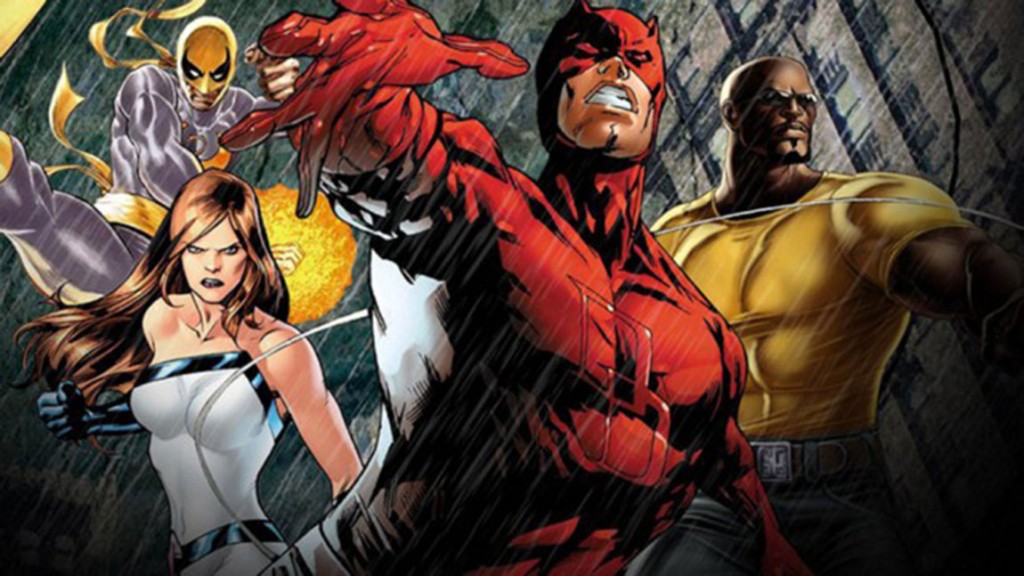 Daredevil showrunners Doug Petrie and Marco Ramirez are the men responsible for bringing the street level team of Marvel superheroes, The Defenders, together on Netflix. Daredevil seasons one and two were successes in their own right, but now the pair has a chance to elevate their game by bringing to life an entire team. The Defenders is the culmination of Daredevil, Jessica Jones, Luke Cage, and Iron Fist, and together they are pretty much the anti-Avengers.

Petrie and Ramirez brought together Daredevil, The Punisher, and Elektra during Daredevil‘s second season, so they have had some experience balancing different personalities. The toughest part will most likely be trying to balance the tone of the four shows. The showrunners consider the new challenge of The Defenders a ‘natural adjustment’.

Petrie and Ramirez both spoke with /Film about The Defenders, and gave us a couple small details about what we can expect. Check out the interview below:

How big of an adjustment was it going from Daredevil to The Defenders?

Petrie: Oh wow, what a great question. It was a very natural adjustment. I’m such a big fan of the other shows that it’s been really exciting to take Matt Murdock, who’s so singular in his focus, and spread him out into this other world.

Does television allow you to spend more time exploring the part where the Defenders don’t get along at first?

Petrie: You have time over the many episodes, exactly, to spread out the characters, let them breathe, let them expand and let them get to know each other, so they don’t have to love each other right away, but we’ll love them by the end.

Ramirez: I think yes. Somebody asked earlier about whether or not The Defenders is going to feature more spectacle, more explosions, basically, was the question.

Are you able to design episodes where it’s only one Defender, or they pair off?

Petrie: We’ll be doing a lot of mixing and matching absolutely, but I think the fun of it is to see the team.

In the writers room, which pairings have you discovered are really great?

Ramirez: We have four stunningly talented actors. The world knows Mike [Colter] because the world saw JJ. So we have four great actors. There’s no version of me answering that question without somehow spoiling something or somehow disappointing an actor.

Petrie: They’re all great. Any two you put together makes sense because if you have Matt and Jessica, you get two very smart hard tripping New Yorkers. If you’ve got Danny and Luke, you’ve got what fans recognize as heroes for hire, but we’re not there yet. If you’ve got Jessica and Danny, you’ve got the hard cynic and the wide-eyed innocent. So there’s really no pairing that doesn’t work.

What are the advantages and disadvantages to having to service so many characters in each sequence?

Ramirez: If anything it’s been a great challenge because it makes you feel like I have to stay true to who these characters are. Luke has to be Luke. JJ has to be JJ and Danny has to be Danny. Same with Matt. If anything, it’s been a real exercise almost in restraint. These people are all so strong headed, so I’ve taken it as a learning experience. They’re all so strong willed and so smart and so capable that sometimes, this was something I experienced writing for Frank [Castle, a.k.a. Punisher] last season, sometimes the page screams back. It’s like, “No, no, this is what I’m doing. I don’t care what your plans are.”

Are you thinking of one monolithic villain or multiple villains for The Defenders?

Petrie: Interesting. We never really think of them as antagonists, first of all. We always think of everyone having their own agenda.

Ramirez: Without giving any spoilers or anything, I can say it’s been a challenge because now that they’re all four together, it feels like they’re so powerful. How cool is this? We get to use all four of these people but I think we’ve found something that feels great.

Can you begin to think of Daredevil season three?

Does showrunning The Defenders leave you in a better place to set Matt Murdock up for his season three?

Petrie: Oh sure. We will be returning all of our characters to interesting new places where their respective show runners can pick up the threads.

There are a lot of take aways from this interview. To start, the team dynamic sounds interesting. It’s good to know we will see different members of the team pair off to explore their relationships, but most importantly it sounds like the entire team fighting together is the primary focus.  They also comment specifically on the Heroes for Hire dynamic between Luke Cage and Iron Fist, but we just haven’t gotten there yet.

They spoke briefly about the villain (or villains?), but not much information was released on that front. It is worth mentioning that the showrunners don’t see the villains as classic antagonists, but just as people with their own agendas. That description definitely fits in with Daredevil and Jessica Jones’ season one villains, Wilson Fisk and Kilgrave. Both characters were evil, but had tragic backstories that almost make the viewers sympathize with them. It’s that shade of grey that makes the Netflix villains so interesting. The Punisher is another character that is defined by a shade of grey and the dual good and evil nature of his actions.

It sounds as if Petrie and Ramirez have their hands full with The Defenders, but it also sounds like they’re ready to tackle the challenge. Are you excited for The Defenders, and who do you think the villain is going to be? Let us know your thoughts down in the comments.