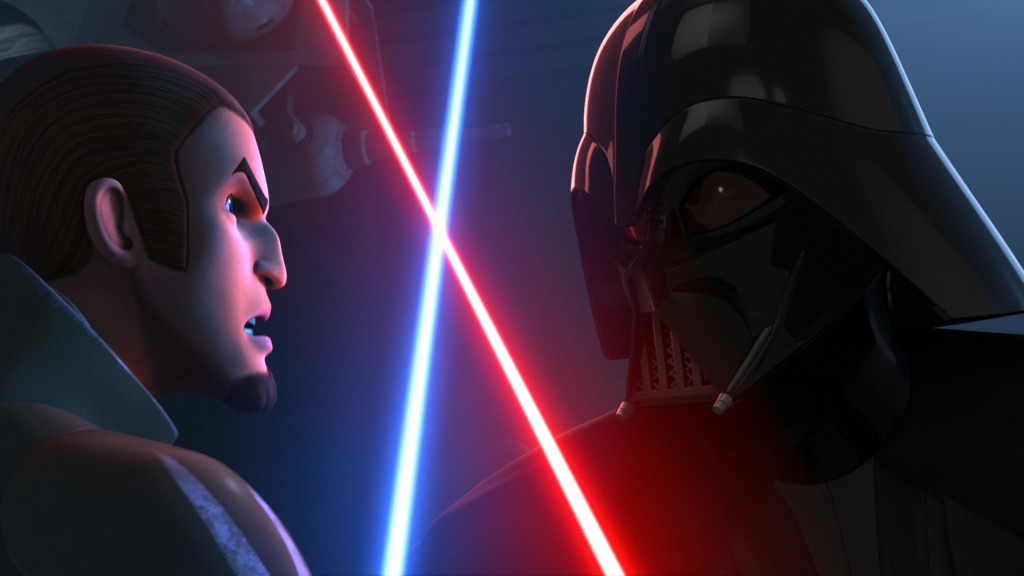 With the upcoming third season premiere of the Disney XD animated series Star Wars Rebels set for late next month, fans are excited to see the return of the Ghost crew, Darth Maul, and the canonical debut of a Star Wars Legends favorite, Grand Admiral Thrawn. This new season is certainly turning towards a darker path, with the latest teaser hinting at Ezra Bridger possibly being tempted to the Dark Side of the force.

Many fans have been wondering about whether or not the galaxy’s most iconic antagonist, Darth Vader would be making a return. The last time we left Vader was during the most recent season finale after he and his former Padawan Ashoka Tano were left behind dueling to the bitter end. Well, for fans hoping for more Vader action in this new season, prepare to be underwhelmed. In an interview with Slashfilm, Dave Filoni answered on whether or not we should expect to see Vader.

You know, I’ve kind of gone on this course, which is pretty, pretty direct about certain things ’cause I don’t like to tease people along and then have them be disappointed. So it’s really an elected decision to not have Vader around because, as we get closer to A New Hope, I want him to serve as that story.

I know it sounds funny. I don’t wanna fill in every hole. I don’t know what we benefit from that. As much as you need to say, okay, this is a major point in his life when he’s confronted by his former apprentice. That is worth doing. Him chasing the rebels of the Ghost crew around is never something that really interested me. Mainly because I didn’t think they could survive it for very long. And now that I have Thrawn, it’s more interesting to me to setup this completely different kind of villain that’s gonna play a long game against our guys that they’re not typically used to.

If you were to ask me, I’d say it makes total sense that Vader’s time on the show is done. Knowing the show’s timeline especially within close proximity to A New Hope, it seems right that Vader should serve his purpose best for that upcoming story. But fellow Star Wars fans, no need to fret because we will see our favorite villain on the big screen once again when Rogue One: A Star Wars Story comes to a galaxy near you on December 16.