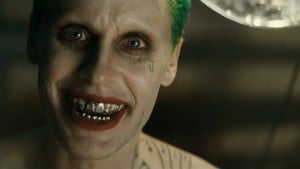 The role of The Joker is a hard one to compete in. Ever since he’s been in films in Tim Burton’s Batman (1989), top notch performances have been delivered by each of the actors who have assumed the coveted role. Jack Nicholson’s performance was considered legendary and there was no way to top that. Then came Heath Leger’s Oscar-winning performance in Christopher Nolan’s The Dark Knight who mixed the right amount of craziness to out-Joker Nicholson. Next up to bat is Jaren Leto, who gets a turn as the Clown Prince of Crime in this Augusts’ Suicide Squad film. His on-set methods have been labeled as “method” to “downright insane.” So how does he measure up?

“When you have someone as talented as Jared, I think when you just accept that Heath [Leger] happened, [The] Dark Knight happened and you just move forward. It’s the oldest, one of the most well known villains of modern culture. To leave him hollow, I think would be a shame. We instantly know who he is. We know how he makes us feel, we know how he’s going to behave. Just one little drawn picture of him and a character that fantastically iconic and powerful almost emerges himself. Once you start touching that character and playing with that character he really does reveal himself in a lot of ways. He’s so defined. Jared has done nothing short of just utterly transforming himself and has done an incredible amount of work. The mannerisms, his voice, everything. When he steps on set you feel it, you feel the energy, the crew feels it. It’s going to be I believe nothing short of a revelation.”

Ayer also talked about Leto’s method of acting on set.

Hopefully, he will measure up to the previous Jokers and offer his own spin on the character.