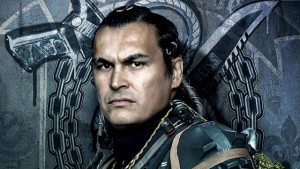 One character who seemingly absent from the general discussion of Suicide Squad is Adam Beach’s Slipknot. Warning, possible spoilers for Suicide Squad ahead.

The biggest reason for the lack of discussion of Beach’s character is that he only serves one purpose in the film, that is to have his head exploded. While some have been critical of the fact that Slipknot’s demise doesn’t come as a big surprise, David Ayer has given his reasoning’s why we never got to know Slipknot before he lost his head.

“You have to pick and choose your battles, and Slipknot gets his head blown off pretty quickly. I made a commitment early on not to try and create some kind of misdirect, because when you have that many characters, every frame of real estate is priceless. I didn’t want to invest in that real estate to create some misdirect, because after opening night everyone knows he dies anyway.”

So, there you have it. Poor Slipknot was always going to be in the movie for the sole purpose of leaving it rather quickly, minus his head.

Have you seen Suicide Squad yet? Do you agree with Ayer’s reasoning behind killing Slipknot? Sound off in the comments section.