DC Comics reveals the Bat-Train as the latest vehicle in Batman’s arsenal as he navigates around Gotham City after The Riddler’s obstructive new scheme.

Batman has never been short on vehicles throughout his war on crime, the supervillains he faces and his role in the Justice League. He’s used numerous versions of the Batmobile, the Batcycle, Batopter, the Batplane and even the Batboat over the years. But the latest issue of the Dark Knight’s solo series from DC Comics adds a surprising new addition to his arsenal as he goes up against The Riddler, following his ambitious plan to lock Gotham City down. His latest puzzle locks off entire sections of the city until each riddle is solved, so obviously Batman has an easy answer of manoeuvering through Gotham without having to get through the blocked off areas: an underground Bat-Train.

In Batman #92, the Caped Crusader heads underground with Deathstroke in tow to board the Bat-Train as a way of bypassing The Riddler’s new scheme. And in true Batman style, the Bat-Train is kitted out out to match the rest of his arsenal, it even has gauntlets like the ones Bruce wields. Although why a train needs gauntlets remains to be seen, but at least it looks cool. James Tynion IV had a tough job following up Tom King’s Batman run, but with additions like this it seems like he’s having no trouble adding his own spin onto the mythos. Take a look at the Bat-Train in Batman #92 below. 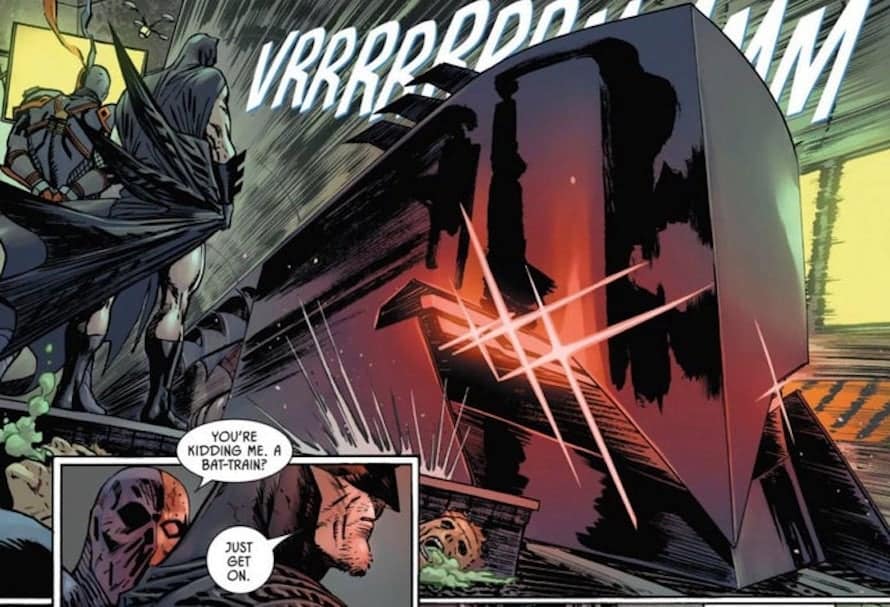 Are you enjoying James Tynion IV’s work on the character? What do you think of Batman’s Bat-Train? What’s your favorite Bat-Vehicle? Sound-off in the comments below!

Stay tuned for all the latest news surround DC Comics and Batman, be sure to subscribe to Heroic Hollywood’s YouTube channel for more great video content!