Although no specific release dates have been provided, the calendar does offer a timeframe for when each series is expected to debut. The animated series Young Justice is set to be split into two halves with the first portion debuting in late December 2018 or early January 2019. It will run through to February before the second portion debuts in June.

Doom Patrol will be the first live-action series to follow Titans on DC Universe and is scheduled to run from mid-February to late May. The James Wan produced Swamp Thing will follow and runs to late August, leading to the premiere of Stargirl.

The final series on the current calendar is the animated Harley Quinn show, which is scheduled to premiere in mid-October 2019, suggest the previously announces second season of Titans won’t be released until 2020 at the earliest. 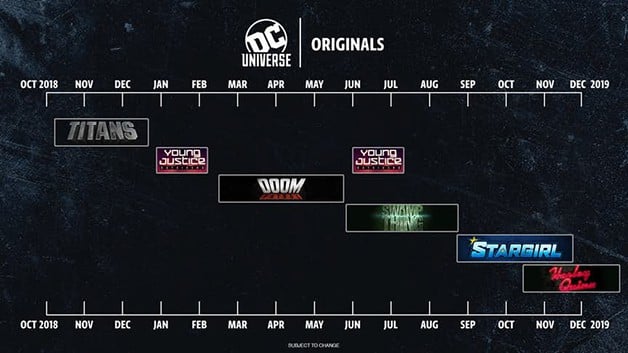 Which DC Universe series are most excited to see? Share your thoughts below!