If you’re planning on visiting the Wizarding World of Harry Potter in Japan you might want to double up on your disarming charm lessons with Dumbledore’s army because something wicked this way comes.

Starting September 14, 2016, the streets of Hogsmeade will transform when night falls.  Universal Surprise Halloween returns for its 15th anniversary with a new kind of experience meant to showcase the darker side of the Wizarding world. This 54-day limited time event will be part of the fall schedule

Death Eaters take the stage when night time arrives as they haunt the streets of peaceful Hogsmeade in incredible detail, something you might want to keep in mind if you planned on bringing first years and other young wizards to the park.

Check out Universal’s official description below.

Death Eater™ Attack” joins the line-up as a new piece of entertainment at The Wizarding World of Harry Potter™. When night falls, this peaceful, cheerful world of magic transforms experiencing moments of darkness. The Death Eaters™ appear in Hogsmeade™ wearing black hoods and masks. Guests can experience the thrill and terror of coming face-to-face with the magical might of The Death Eaters™, discovering an unprecedented feeling. 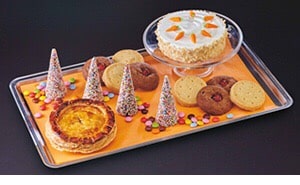 That’s not the only thing coming to Hogsmeade this fall, Magical Trick or Treat becomes part of the immersive experience as villagers in character hand out sweets to guests. Limited edition food will also be available at the park with their ‘Hallowe’en Dessert Feast’, ranging from chocolate desserts to carrot cake and candy.

There have been no sightings of the Dark Mark in Orlando or Hollywood yet but I’m sure it’ll make its way to the states eventually. Death Eaters land in Japan starting September 14, 2016.