Ever since Steve Rogers lost the Super Soldier Serum and was reverted back to an old man and Falcon assumed the role of ‘Captain America,’ fans knew that eventually he would find someone to gain back his youth and abilities. When promotional pictures for the comic Captain America: Steve Rogers showed our beloved captain back, young, and ready for action, some speculated why he didn’t have is coveted shield. Did this mean that Falcon would relinquish the title? What would happen in this new world? With the debut of Captain America: Steve Rogers, we did get some answers, and we also got a huge curveball thrown at us.

GIANT SPOILERS AHEAD: Read at your own risk. 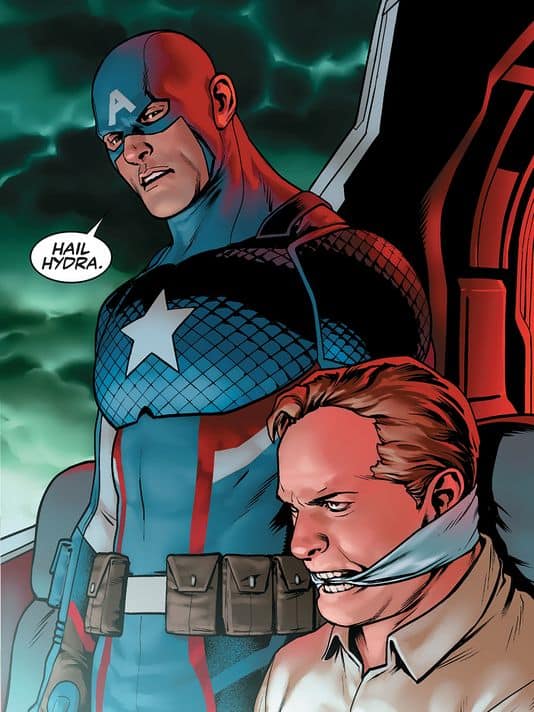 Turns out Steve Rogers not only kills Jack Flag, but confirms that he has always been an agent of Hydra.  Wait what?!?  For the past 75 years, one of the founding members of The Avengers has been operating as a double agent?  Fan immediately came to the conclusion that this is a clone, a Life Model Decoy, or an alien Skrull.  Marvel Executive Editor Tom Brevoort and writer Nick Spencer confirmed our worst fears, that this is, in fact, the real Steve Rogers and the wool has finally been pulled from over our eyes.

“His mission is to further the goals and beliefs of Hydra.  If that involves taking down the Marvel universe, sure. (But) it may not be as simple as that. It’s not like he’s exchanged his white hat for a black hat — it’s a green hat. We knew it would be like slapping people in the face. The idea of Captain America means something very primal and very strong to the people of this nation, and they have a very visceral reaction when you get to something like that. You want people to feel and react to your story. So far, so good.”

So does this feel like a slap in the face? Sound off in the comments.