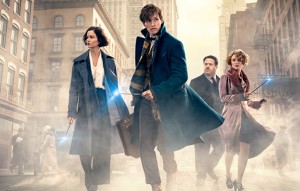 Fans anxiously waiting for the release of Fantastic Beasts and Where To Find Them, a brand new installment in the Harry Potter film universe, now have something to tide them over until the film hits theaters. Pottermore has officially debuted the first track from the films soundtrack.

Composed by James Newton Howard, the maestro behind popular film scores including The Dark Knight and The Hunger Games, fans will notice the main title opens with a few bars of “Hedwig’s Theme” from the original Harry Potter films before transitioning to the brand new main theme. Howard commented on when audiences can expect to hear the main theme in the film and how it came to him when writing the score.

“You hear the main theme song of the movie play when the main crew arrive at the MACUSA the first time and various other times. You hear this haunting kind of theme. If you had to say what is the theme for Fantastic Beasts and Where to Find Them for now and in the future, it would be that theme. I wrote it on my piano because I believe that if that kind of thing is going to be good, it should be done that simply.”

You can listen to the entire track below.

The standard soundtrack features seventy-two minutes of music by James Newton Howard. A deluxe edition of the soundtrack will also be released with roughly thirty minutes of additional music.

1. Main Titles – Fantastic Beasts and Where To Find Them
2. There Are Witches Among Us / The Bank / The Niffler
3. Tina Takes Newt In / Macusa Headquarters
4. Pie or Strudel / Escaping Queenie and Tina’s Place
5. Credence Hands Out Leaflets
6. Inside The Case
7. The Erumpent
8. In The Cells
9. Tina and Newt Trial / Let’s Get The Good Stuff Out / You’re One of Us Now / Swooping Evil
10. Gnarlak Negotiations
11. The Demiguise and The Occamy
12. A Close Friend
13. The Obscurus / Rooftop Chase
14. He’s Listening To You Tina
15. Relieve Him of His Wand / Newt Releases The Thunderbird / Jacob’s Farewell
16. Newt Says Goodbye to Tina / Jacob’s Bakery
17. End Titles – Fantastic Beasts and Where To Find Them

1. A Man and His Beasts
2. Soup and Leaflets
3. Billywig
4. The Demiguise and The Lollipop
5. I’m Not Your Ma
6. Blind Pig performed by Emmi
7. Newt Talks To Credence
8. End Titles Pt.2 – Fantastic Beasts and Where To Find Them
9. Kowalski Rag 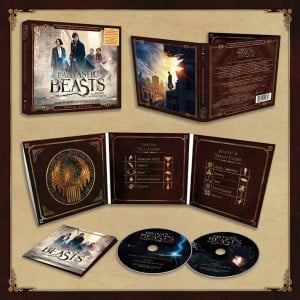 Both soundtracks will be released on November 18, 2016 and are now available to pre-oder on Amazon and iTunes.

Fantastic Beasts and Where to Find Them opens in 1926 as Newt Scamander has just completed a global excursion to find and document an extraordinary array of magical creatures. Arriving in New York for a brief stopover, he might have come and gone without incident…were it not for a No-Maj (American for Muggle) named Jacob, a misplaced magical case, and the escape of some of Newt’s fantastic beasts, which could spell trouble for both the wizarding and No-Maj worlds.

Fantastic Beasts and Where to Find Them opens in theaters in 3D and IMAX on November 18, 2016.