In Defense Of The Oscar Victory Of ‘Suicide Squad’

'Suicide Squad' won the Academy Award for Achievement in Makeup and Hairstyling. Here's an argument as to why it was worth recognizing.

Last night’s telecast of the 89th Academy Awards will go down as one of the most memorable in history. Not only did the historic mix-up between Moonlight and La La Land create commotion at the Dolby Theatre and on the internet, but the fact that DC’s hit film Suicide Squad took home a statue for Best Makeup and Hairstyling caught many viewers off guard.

It is no secret that Suicide Squad wasn’t the critical darling that the DC Extended Universe desperately needed after the negative critical buzz from both Man of Steel and Batman v Superman: Dawn of Justice, but seeing all the snark online about this particular aspect of David Ayer’s supervillain team-up film was quite fascinating.

As someone who was pretty disappointed with how Suicide Squad turned out, the prospect of it becoming an Oscar nominated film – let alone a winner seemed pretty laughable. In fact, this victory reveals that the DCEU now has more Oscars than the Marvel Cinematic Universe. Given the public perception of both franchises, this fact is inherently funny.

But for all the snark that can be tweeted ad nauseam about the Oscar win, I’d like to express why this achievement was actually well-deserved.

For starters, take a look at Killer Croc. This would mark the first live-action depiction of the character we’ve ever had, and putting actor Adewale Akinnuoye-Agbaje in all that makeup was a grueling task. The attention-to-detail in bringing Croc to life deserves all the praise it gets. For those who own the Blu-ray – particularly the 4K release, I’d encourage you to pause at any scene featuring Croc, and marvel at every scale he has. That alone is worthy of the nomination and victory. 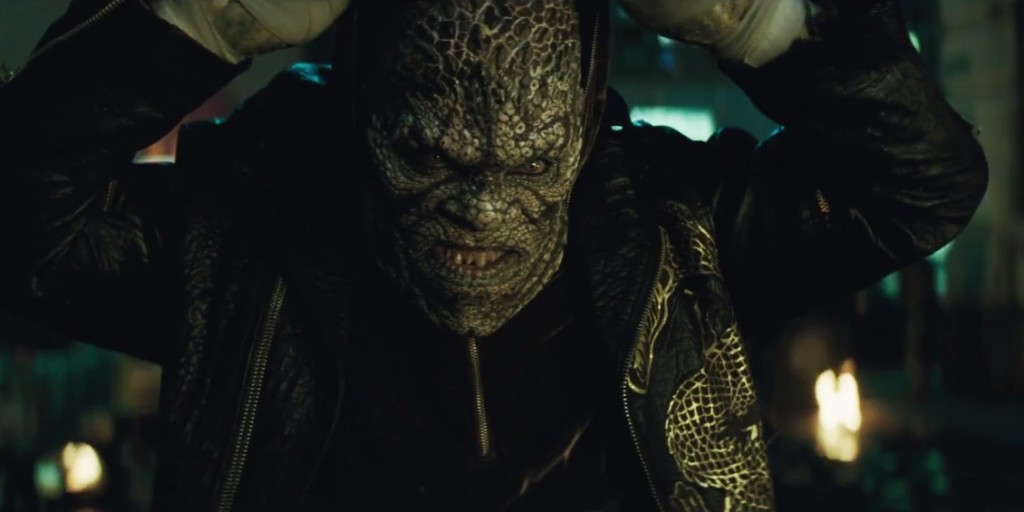 Then of course, we have the Joker. Admittedly, I wasn’t fond of Jared Leto’s take as the Joker. Although I believe that this character can go through different changes in any iteration the creators seems right, Leto’s Joker just felt a bit too odd for my taste, and felt more like someone *playing* the Joker rather than truly losing themselves in the role.

However, I’ll give the makeup and hairstylists credit where credit is due. Although the design of this Joker is an acquired taste to say the least, his green hair and especially his tattoos brought a statement to the audience, in which that this isn’t your daddy’s Joker.

Which brings us to the standout of Suicide Squad, which is undoubtedly Harley Quinn. Margot Robbie’s take on this iconic character was the most universally-praised aspect of the film. She was so beloved, that Gotham City Sirens is in the works.

It’s hard separating the iconic court jester costume from Harley. Of course, we see a quick shot in the film in which she dons that costume as she and the Joker share a waltz together. But finding a way to bring the character in live-action form to fit with Ayer’s tone was a fascinating task. Thankfully, it worked out terrifically in the end. You know you’ve accomplished something when come Halloween, countless Harley Quinn cosplayers are everywhere – and much of that is thanks to the makeup and hairstylists.

Lastly, I wanted to give spotlight to one of my personal favorite characters from the film – who I consider to be the film’s secret weapon. El Diablo, portrayed wonderfully by Jay Hernandez has one of the most striking designs in the movie. With his face full of distinct tattoo designs mixed in with the stellar nuances of Hernandez’s performance brought the film to a much-needed grounding in emotions.

Overall, despite having plenty of qualms over Suicide Squad, I can’t criticize the work of the makeup and hairstylists. Bringing some of the more obscure characters in the DC lore to life was no easy task, but the collaborative effort from the designers and the makeup artists deserves all the praise. Sure, it’s easy to dismiss this victory and chuckle at the fact that the film is a legitimate Academy Award winner, but this individual achievement is one worth celebrating.