While fans didn’t get a trailer for Rogue One: A Star Wars Story at Star Wars Celebration Europe this year, we did receive an incredible “sizzle” reel that showed off behind-the-scenes footage of life on set and introduced us to brand new characters. Two of those characters were Pao and Bistan.

Director Gareth Edwards explained that in crafting Rogue One he wanted to put an importance emphasis on the aliens that become a part of the uprising. It wasn’t until Edwards saw Neal Scanlan’s creature department’s imagination that these characters came to life.

“It wasn’t like, ‘We’ve got this character, we need to design a creature for it, and here’s what this creature’s like. It was more like we told the creature department to come up with a thousand ideas, and then it was like casting the movie. There were walls and walls of these different types of characters that we could’ve picked from. We just went through them, like, ‘God, he’s fascinating…. Who’s that…? And she looks amazing…! And what’s that there?’ Slowly, we got it down to our top hundred, and then it got even more refined.” 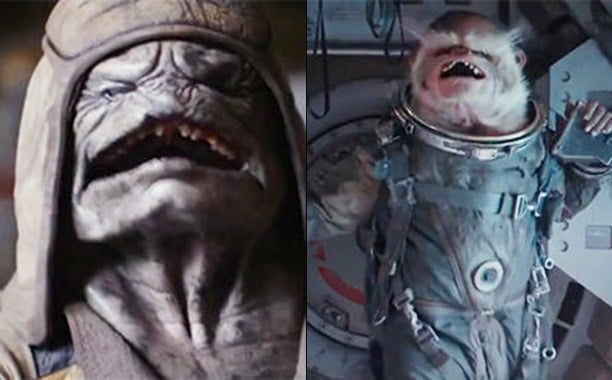 Edwards opened up about Pao and Bistan. Pao earned the nickname of “Bigmouth.” He is a platoon leader who coordinates battles.

“There was this great design of this creature that’s mouth would open really wide, and he looked like he was really good at giving orders and shouting at people during a battle. I was like, ‘We’ve got to give him that moment in the film,’ and so [Pao] was born out of that.”

Next up, Bistan. He was first seen in the Celebration reel operating a gun and laughing hysterically.

“It’s not necessarily a character that we get to know, but I think he has a very memorable, iconic look. [He’s] one of my favorites. I can’t give away what happens to him.”

Another new Rogue One character made an appearance at San Diego Comic-Con yesterday. The lifesize statue showed off Edrio Two Tubes. 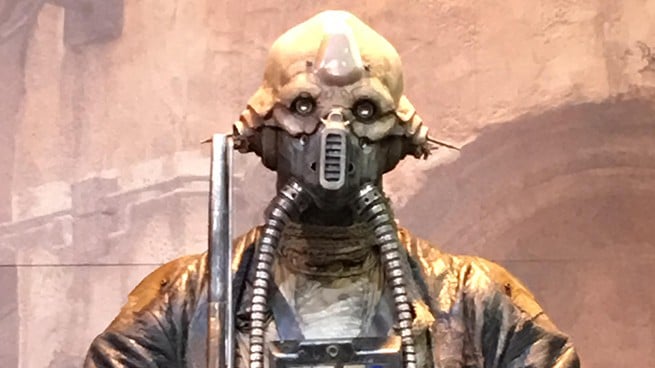