Steve Ditko is getting some real love by Marvel Studios this year.

In Captain America: Civil War, Spider-Man’s new costume was greatly inspired by the art of Steve Ditko and now according to the head of Marvel Studios, Kevin Feige, the Doctor Strange film will be influenced by the writer/artist as well, along with comic book writer, Brian K. Vaughan.

Many characters in comics over the years have had reinventions of their origins. However, like Tony Stark, as Feige explained in an interview on the set of Doctor Strange, the Sorcerer Supreme has had a consistent origin, which he considers one of the building blocks of the character.

“His origin has always been, like Tony Stark’s, relatively stable, relatively consistent, and we’re certainly pulling from that. The arrogant New York neurosurgeon who’s a bit of an ass and he’s extremely arrogant, and who has a horrible accident, mangles his hands, his tools, and who loses his identity and loses his self and has a nice downward spiral before finding his way in a last-ditch effort in something he doesn’t even really believe int to Nepal and to the people he will encounter, who will teach him and open his eyes to a whole other reality. We’re certainly doing that origin. I think it’s one of the coolest origins in our comics and certainly from a cinematic point of view, the most sort of interesting singular character journey, maybe since Iron Man 1, that we’ve plucked from the books.”

Feige went onto explain the influence of writer and artist, Steve Ditko on the film.

“I would say Steve Ditko and the art of Steve Ditko is a huge inspiration for us. A lot of our interpretation of the multiverse and various dimensions come right out of all of the artwork from those early comics that Mr. Ditko did. We’re challenging our amazing visual effects vendors and visual effects supervisor. We’re saying, ‘Let’s put this on the screen.’ It’s really weird and you don’t want to turn away from that. You don’t want to suddenly just turn it into a galactic cosmos. It needs to be strange. It needs to be weird. It needs to be absolutely inspired by those images.”

In addition to Ditko being an important influence on the look of the film, another writer’s work will be equally so in another way. Author, Brian K. Vaughan’s five-issue limited series, Doctor Strange: The Oath, published in 2007, is said to have impacted the overall tone of the film, Feige said.

“It’s because that had a very fun tone to it. Doctor Strange had a unique, fun voice. Even his voice in this movie, I’m not sure you would initially go, ‘I remember that in The Oath.’ Actually, there’s a sequence from The Oath that directly inspired a sequence in this movie, which was the sequence that Scott actually included in his very earliest pictures to us.”

If you remember, months back, pictures made their way onto the Internet showcasing Benedict Cumberbatch, dressed in full costume, buying a copy of The Oath at a comic book store during filming. However, the movie will not be an adaptation of the book. 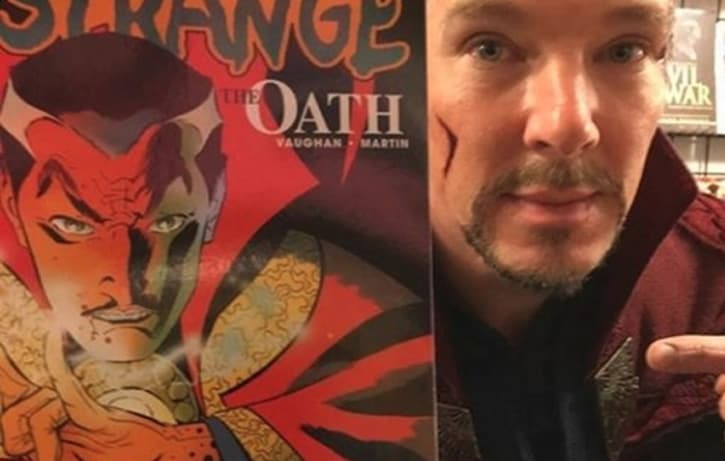 Doctor Strange will be released in North America on Nov. 4, 2016.