It’s understandable why actors, directors, and even writers feel a certain amount of pressure when adapting beloved comic book characters like Doctor Strange to the big screen. They’re the public face of the film and therefore subject to the praise and criticism of audiences. However, the men and women behind the camera who likely won’t be making the rounds on the press tour also face a tremendous amount of pressure. Costume designers, production designers, and special effects artists are tasked with the daunting challenge of bringing the visual elements of a comic book character to life. From the iconic superhero costumes to the memorable locations, the production team must find the difficult balance between satisfying the wishes of fans and meeting the practical demands that come with producing a feature film.

While it may seem as though the pages of a comic book are the only resource a costume designer needs to bring a superhero’s outfit to life, there are several factors they must take into consideration when ensuring the costumes translate well on screen, ranging from choice of fabric to the shade of color. Costume designer Alexandria Byrne spoke with journalists who were invited to the set about her process and the kind of challenges that can arise during production:

“I use color very instinctively. I only realized that when I was doing Guardians of the Galaxy when everybody had different skin colors and I spent about six weeks being paralyzed not knowing what color to put people in because I wasn’t working with skin tone anymore”

Byrne continued to explain how color is used as a narrative device and how the comics influenced her work:

“I think color for costume designer is one of your biggest story-telling devices because you’re pulling focus or you’re playing composition with color. The main inspiration for how I start to use color or allocate color is work. It comes from the comics and that’s where it all starts from.” 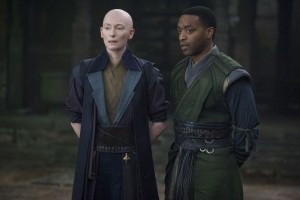 A portion of on-location filming for Doctor Strange took place in Nepal, but the production team was also tasked with recreating the location on their sets back in London. Considering Nepal served as the crucial setting of Kamar-Taj, the isolated community where Stephen Strange begins his journey towards becoming The Sorcerer Supreme under the tutelage of The Ancient One, it was important for the team to ensure the Nepal on the studio stage was indistinguishable from the Nepal on location.

“The Nepalese sets are probably the hardest ones to do because they were most unusual,” Production designer Charles Wood explains during the set visit. Wood elaborates:

“We had extras from Nepal coming on to the stage, you wander around with them, hopefully not going to start laughing their heads off at the stage. They seemed to embrace it, they seemed to be really pleased that we’ve gone to that much effort.”

Wood also revealed that the production team went to great lengths in order to lend authenticity to their sets, even going as far as seeking input from the Nepalese people. “As we did Nepal,” Wood explains, “we were showing a lot of the people in Nepal what we were doing in the U.K. to see if we could get their support, and they gave that to us.”

Wood went on to praise his team and the effort they put into recreating real locations on a studio stage:

“I was saying the other day that in the U.K. here, I’m really lucky. I really do have one of the finest crews you could have. The plasterers, they’re all artisans, these guys, and the painters, and all of that. All of them. They bring a massive authenticity to these types of films.” 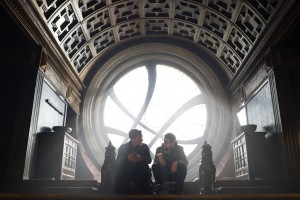 Credited with creating Doctor Strange when the character debuted in Strange Tales #110 in 1963, Steve Ditko’s visually dynamic artwork became a gold standard when it came to creating the mystical and other worldly dimensions that the character would traverse.

So when Marvel Studios released the first teaser for Doctor Strange, some fans were disappointed that the bizarre visuals for the film seemed to influenced less by Ditko’s artwork and more by the dream sequences in Christopher Nolan’s Inception. However, Charles Wood assures fans that the starting point for the production team was certainly Steve Ditko’s comics.

“Ditko was a huge influence in all of that, and we took that as a starting point, and took it from there, to try and come up with something very different.”

Wood explains that translating the visuals from page to screen was an intimidating challenge at first. “It was looking at how those other dimensions are being portrayed in the comics,” Wood says. “I looked at that stuff in the beginning and thought, ‘Oh my god, how could that ever translate into film?'”

However Wood’s apprehension was short lived and he quickly found himself up to the task. “If you have that attitude, you’re never going to get anywhere because you won’t allow yourself to go into that world,” he explains. 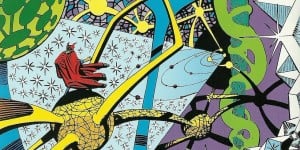