Since the MCU has mostly stayed within the realm of science fiction, it was unclear to fans how Doctor Strange would handle the titular superhero's powers.

As the Sorcerer Supreme, Doctor Strange has a number of abilities at his disposal. But since the Marvel Cinematic Universe has mostly stayed within the realm of science fiction (even explaining Asgardian gods as aliens with access to advanced science), it was unclear to some fans how Doctor Strange would handle the titular superhero’s powers.

Kevin Feige, the head honcho over at Marvel Studios, has not provided a full explanation as to how magic will work; however, he has at least given fans a rundown of which powers they can expect to see in the upcoming film.

“He can do a whole host of things, eventually. He does cast spells, which in the comics have very sort of tongue-twisty fun names. We don’t want to shy away from that, because that’s what makes Doctor Strange Doctor Strange. He has a Cloak of Levitation that allows him to fly, but he doesn’t fly like Superman or like Thor. It’s almost got a consciousness of its own, this cloak, which, again, gives us a superhero with a red cape — which we’ve seen a few times — but allows us to do it in a wholly unique and wholly original way. He can create these mandalas of light that he can use as shields and he can use as sort of weapons. He can create portals that will open before your eyes that he can step through and go to other places around the world. And frankly, even in this film, we’ll only touch upon what a lot of his powers are.”

Strange is known not only for his powers, but also for two of his major accessories. One (the Cloak of Levitation) is discussed above. The other is the Eye of Agamotto, the pendant worn around Doctor Strange’s neck.

“The Cloak of Levitation [and] the Eye of Agamotto are his two signature pieces. In this film, the Eye is a very important relic that can be quite dangerous if used in the wrong hands, because it has the ability to do any number of things, the most dangerous of which is, it can sort of manipulate probabilities. Which is also another way of saying, ‘screw around with time’ — which is part of our story.”

While this seems like an extensive rundown, it’s likely that Feige wouldn’t give too much away nearly a year before the film’s release. As for any powers which remain untold, and how the powers discussed above will be used, Feige may have given us a hint in his reference to time. Fans of the MCU are well aware that there are still two Infinity Stones that we have not seen. One of these is the Time Stone, and it just may be the source of that green glint emanating from beneath the surface of the Eye of Agamotto on the recent cover of Entertainment Weekly. 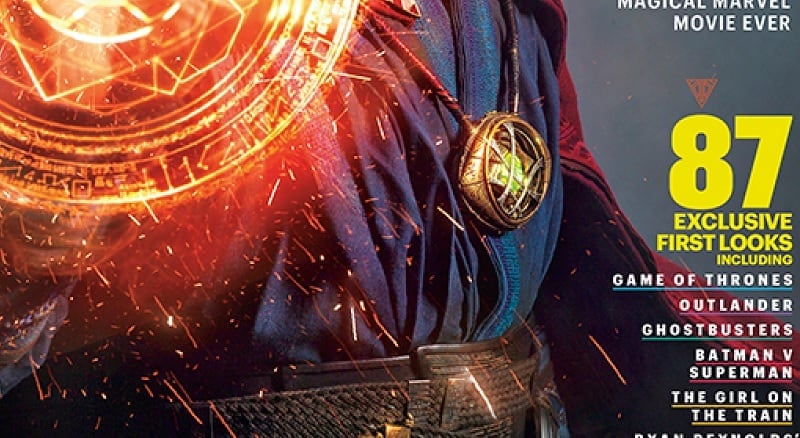 Will fans get to see yet another Infinity Stone in Doctor Strange? There’s technically no confirmation as of yet, but it certainly looks plausible. We’ll find out for sure when the film is released on November 4, 2016. Until then, we’ll give you the latest news as it arises.