Doctor Who: Clara Chooses to Face the Raven Bravely

With only two episodes left before the end of series nine, we’re left with a Doctor without a companion. Warning: If you’ve yet to seen “Face the Raven,” look away now. As River Song would say – ‘Spoilers!’

I’ll start this off by being honest with you: I was ready for Clara Oswald (Jenna Coleman) to leave. While she had some brilliant moments as the companion, I was beginning to think that she was overstaying her welcome. When the (awesome) new Twelfth Doctor (Peter Calapdi) arrived last season, showrunner Steven Moffat for some reason decided that main focus of the season should be on Clara and her personal life. (Facepalm) While I liked the season’s overall arc, I didn’t like how she had become the main focus. When you have an Academy Award winner like Peter Capaldi take center stage, you should damn well make sure the spotlight and stories are centered on him.

This season, Clara took on a more traditional companion role. She was back in the passenger’s seat, serving faithfully as the audience surrogate. Well, mostly. In the wake of Danny Pink’s death last season, Clara Oswald became more and more of a thrill seeker. She has always been bold, after all she was born to save the doctor, but this time around something was different. She was pushing it further and further, making rash treacherous decisions and the doctor was noticing.

“Face the Raven” brought back a number of familiar faces, including graffiti artist Rigsy, who was introduced in season eight’s “Flatline,” and the immortal Ashildr / Me, portrayed by Game of Thrones’ Maisie Williams. Throughout the episode, our heroes are led to a real life trap street that is actually a sanctuary district for aliens. Acting as the mayor of this home for refugees, Ashildr frames the gentle Rigsy for murder and sentences him to death with a Chronolock quantum shade. 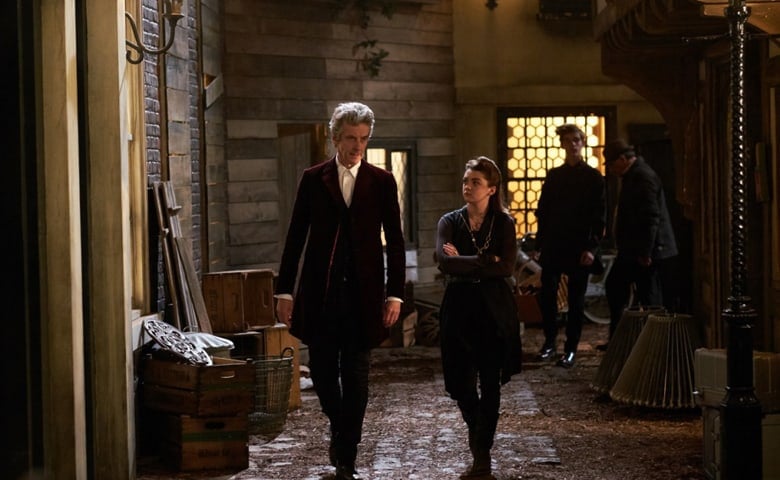 The Doctor and Ashildr roam the sanctuary area on London’s trap street.

The Doctor and Ashildr roam the sanctuary area on London’s trap street.

The chronolock manifests itself in the form of a tattoo on the back of the guilty party’s neck, counting down the minutes until their time is up and the deadly Raven will come to claim them. In an attempt to force Ashildr’s hand, Clara convinces Rigsy to transfer the Chronolock quantum shade over to her, believing that she would be safe from any harm. She thought that Ashildr’s promise of her safely given earlier in the episode would save her.

After revealing that it was all a ruse to ensnare the Doctor and transport him away, Ashildr says that she cannot remove the death sentence from Clara. She only had the ability to remove it from the original host, which was Rigsy. Once it was transferred over, the rules changed. Clara’s death could not be avoided. The Doctor had a little under eight minutes to come to terms with the fact that his companion was going to die, and there was nothing he could do to stop it.

The whole incident is not without a sense of irony. It was Clara who begged the Doctor to save the young girl back in “The Girl Who Died.” In saving her, she became immortal. Living for hundreds and hundreds of years with a limited memory has turned her into one of the most compelling characters of the 12th Doctor’s time.

Saying that he didn’t take it well is a bit of an understatement. He threatened to expose Ashildr’s sanctuary to UNIT, and then the world. He promised to rain down armies of Zygons, Cybermen and Daleks. When the immortal begged him for mercy, claiming that the Doctor is someone who saves people, his icy-cold voice told her that The Doctor wasn’t there anymore, and that she was stuck with him. (Yeah, I got chills too.) It was only thanks to Clara imploring him to spend his immediate future healing himself and not going out for vengeance that he stopped himself from going on a rampage.

In the end, she was right. While the Doctor was convinced that he should have done more to curb her newfound recklessness, this episode only reinforced what we have known ever since she was first introduced in series seven. Clara was the one companion that he could never say no to.

This season however, she was even more defiant, and I believe that it was because she never fully recovered from the death of her boyfriend Danny Pink last year. Like many people would be after the loss of a loved one, Clara was lost. Perhaps what is what this season was really about. Clara was taking bigger and bigger risks, leaping before she looked, until she finally had to face the raven.

Clara faced her death in a manner that was worthy of The Doctor himself. Rather than running away, she stands bravely in the street, awaiting the deadly raven. She made the choice to die right, like the aforementioned Danny Pink. She saved the life of one friend, and the soul of another. In the end, Clara died like a hero.

If I can be honest with you again, this was a brutal episode to watch. We’ve known for some time that Clara would be leaving the show, and that she would never be coming back. Even though I was ready for her to go, her death hit me pretty hard. Most of the companions in Doctor Who’s were left behind by the Doc after his impact on them ends up changing them for the worse. Very few get killed off. Giving the pair time to say goodbye was a sad moment, but also an incredibly touching one.

Writing off a long-term companion is tough to do. Sometimes it’s bittersweet, and sometimes it breaks your heart. If I had to take a stab at this one, Clara Oswald leaving Doctor Who was somewhere in between the departures of Martha Jones and Donna Noble. It was tragic, but there was a sense of closure and acceptance.

There are still a few episodes to go before series nine is over. First up are the final two regular episodes, “Heaven Sent” and “Hell Bent.” After that there will be a Christmas special. All three will be extended episodes. The first two will (hopefully) show us who wanted to trap the Doctor and steal his “Confession Dial.” The last will bring the return of River Song, which is always fantastic.

Both Peter Capaldi and Steven Moffat have said that the death of Clara Oswald will greatly impact the Doctor, which is par for the course. When Donna Nobel’s memory was erased and her friendship with David Tennant’s Tenth Doctor was destroyed, our hero went on a rule-breaking bender that ended with a mortal injury and regeneration. When Matt Smith’s Eleventh Doctor lost Amy and Rory during an attack from the Weeping Angels, he took refuge in the clouds above 19th century London for decades. We don’t know what path Capaldi’s take on the character will be, but odds are that he’ll be putting those ‘attack eyebrows’ to use.

The vast majority of Doctor Who companions are written off at the end of seasons. Killing Clara Oswald in “Face the Raven” was a gutsy move. It leaves us with another multiple-episode story arc. All I know is that I feel sorry for whoever it was that wanted the doctor teleported to that prison. Once their identity is revealed, I have a feeling that they will end up paying in one way or another for what happened to Miss Oswald.

For many Doctor Who fans (including myself), there was little doubt that it was time for Jenna Coleman to go. Staying on longer would have run the risk of making her character feel extremely stale. Still, the fact that they were able to write her off in a way that even someone like myself found emotionally satisfying is amazing. There have been times in the past that I cheered when a character left. I thought I would do the same here. I was wrong.

Before he was teleported, Capaldi left a chilling warning for Ashildr. “You’ll find it’s a very small universe when I’m angry with you.” I don’t know about you, but that would scare the hell out of me.

What about you? Any guesses as to who it was that wanted the Doctor locked away?  Were you satisfied with how the plucky Clara Oswald left the show? Drop your thoughts in the comments section below.