Out of all the classic Disney animated movies, Dumbo never quite did it for me. Don’t get me wrong, I remember enjoying it, and then finding it peculiar as a teen, but it just wasn’t one of those films that I obsessively watched in childhood. So, going into Tim Burton’s new take on Dumbo, written by Ehren Kruger, the scribe behind The Ring and a few of the Transformers movies, I had zero expectations. Luckily, I can report that the creative team came up with something truly special because Dumbo is an enjoyable film that balances tender, personal moments with comedic bits and larger questions about finding one’s place in an evolving world.

Set against the backdrop of post-World War I America, the film chronicles a changing country as its citizens and returning vets adjust to the new world. Max Medici’s (Danny DeVito) traveling circus is hurting financially, and in an attempt to turn things around he invests in a pregnant elephant with the hopes a calf will generate publicity and new customers. Despite the film’s silly and absurdly cute moments, a sense of struggle and hardship permeates Dumbo. Even the members of Medici’s troupe, who are a source of joy for circus attendees and moviegoers alike, all have unique problems and emotional setbacks to underscore the feelings of uncertainty that permeated American society after the war.

Part of what makes the film such a success are the beautiful visual effects. Like many vaudevillian performers and icons of the silent film era, Dumbo expresses himself fully with his facial movements and body language. Whether he’s being mocked for his oversized ears or soaring through the air, the audience can track his emotions by watching his motions and mannerisms slowly adapt to each new situation. For a character who is essentially a mythological creature, Dumbo is relatable as he tries to overcome loss and reunite with his mother Jumbo. It doesn’t matter that they are computer-generated elephants, if you say watching Dumbo and Jumbo interact doesn’t simultaneously warm and break your heart, there is probably something wrong with you. 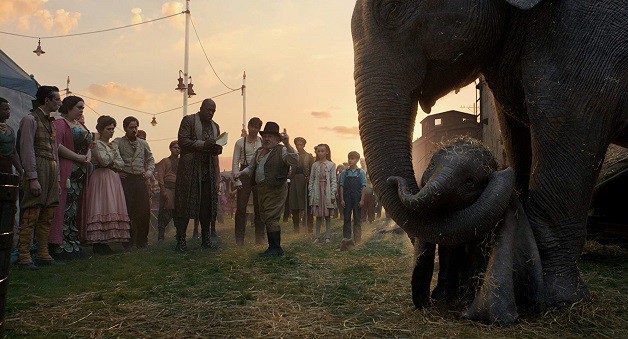 A soaring elephant may be at the heart of the movie, but Dumbo really is all about the power of family and personal relationships. Everyone in Medici’s circus and the members of the Farrier family have a problem they want to overcome, and their sense of community empowers them to keep moving forward. Instead of simply focusing on Dumbo, the film is interlaced with parallel human stories that work to connect the circus members’ inner-conflict with Dumbo’s own journey of self-discovery. Holt Farrier (Colin Farrell) in particular has an interesting journey that sees the veteran return home without an arm and struggle to adjust to life as a single-dad for two young kids. Farrell gives a convincing performance that sees Holt’s strife and anger slowly dissipate as he becomes increasingly vulnerable and acceptant of his shortcomings throughout the movie.

Some kids movies stumble when it comes to the child performers, but Nico Parker and Finley Hobbins do a great job bringing Milly and Joe Farrier to life. Parker believably displays Milly’s frustrations and feelings of being stuck in place as she desperately tries to change her path and become a scientist despite pushback from her father and fellow circus members. In fact, every member of Dumbo‘s ensemble turns in a solid performance. It’s great seeing Danny DeVito and Michael Keaton back on screen together, especially with this interesting twist on their normal roles that sees Michael Keaton play the sleazy, corrupt businessman V.A. Vandevere, as DeVito’s Medici is more compassionate and pure at heart. Eva Green turns in a lush, sensitive performance as Colete Marchant, a French aerial-acrobat who was plucked off the street and given the impossible task of flying Dumbo in-front of an audience.

While Dumbo is still at the center of the action, it’s hard to call this film an adaptation of the animated version. That’s a good thing for a lot of reasons, as a live-action version of Jim Crow and his crew would not go over well now. Dumbo may fly around, but there are no talking animals, and it’s clear that the creators wanted to keep this movie tapped into a sense of realism. Instead, this movie uses the core of the original, mainly the idea that one’s differences can also be their strength, and extends that motif to an entire world and struggling cast of characters. Things still feel mystical and goofy, but the darker undertones associated with the movie’s time period are felt throughout. 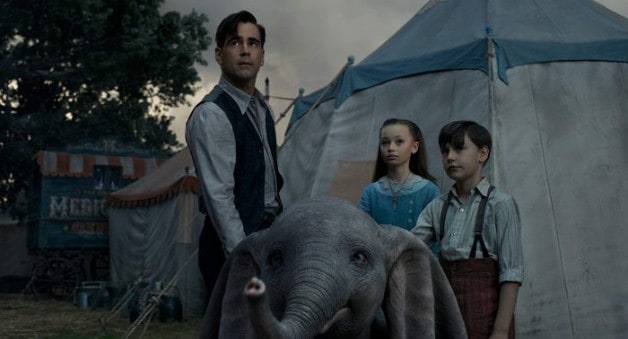 Like most Burton films, Dumbo really works due to the exquisite attention to detail. Tear the fantastical elements away and the film still functions as an interesting period piece set in post-WWI America. Things like the influenza are mentioned in passing but it’s really the beautiful costumes and immersive set designs that hammer home the feeling of being in the early 20th century. As the characters segue from the countryside to New York, the vivid look and color pallet of the film slowly change as a visual cue to the audience that things aren’t exactly what they seem.

There are a few cheesy moments, but the good certainly outweighs the bad in Dumbo. In classic Disney fashion, it really does seem that every character grows and learns over the course of the movie and there are some valuable moral lessons younger audiences can take home with them after seeing it. You won’t leave this theater thinking elephants can fly, but I promise you’ll leave wishing you could have been in the circus tent where Dumbo made his debut.